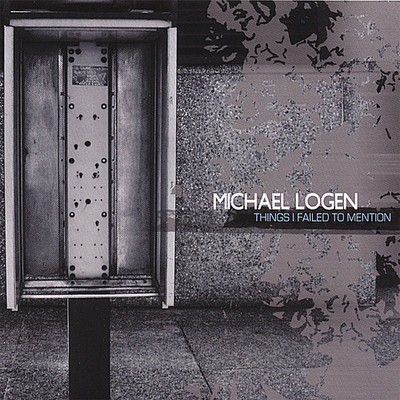 "I believe, at the end of the day, we're all artists", says newcomer, indie-rocker Michael Logen. "The question is whether we'll embrace it every day or run screaming from it. The beauty is the fun and danger of sharing it.' Blending elements of pop, folk and rock, Michael wrote, arranged, played on and co-produced his long-awaited debut album, 'Things I Failed To Mention'. Much of the album was written while backpacking through Europe with a guitar and notebook. Michael is joined on this album by co-producers Joe West (Emmy Lou Harris, Jewel, Justin Timberlake) and Chris Farren (Dave Matthews, Johnny Cash) with a guest appearance by recording artist Jill Phillips. If you like happy-go-lucky dittys that tie things together neatly by the end of the song, then this album is not for you. But if you're looking for a moody intensity that erupts into a pure and powerful line at a moment's notice, songs dark and beautiful, this may be the album you've been waiting for. Though Michael has a home in Nashville, he spends so much time traveling the US and Europe that his true home arguably consists of a suitcase, a guitar and a hotel room. Whether touring with a full band or playing solo, Michael's emotive live show and captivating stage presence are holding fans spell-bound around the globe and building a fiercely loyal following. Michael has played the Ryman Auditorium, Exit/In, The Living Room in NYC and in venues and universities all across Europe. • 2-time Winner of the 2006 Singer/Songwriter Awards in London with "So Much For Amazing" and "Mystery". (wearelistening.org) • Recent writing/recording trip to Istanbul with Aware artist Mat Kearney • Traveling to Tel Aviv, Israel in March 2007 to produce and co- write with three of AGA Publishing's Israeli artists "A fantastic sound! Soulful and wonderfully romantic. Wistful and full of passion and spirit. I love it!" - Jason Levitt "Considered and flowing...simple, great lyrics" - Steve Williams (Sting, Eric Clapton, Seal)

Here's what you say about
Michael Logen - Things I Failed to Mention.