Lauren Kinhan - Circle in a Square 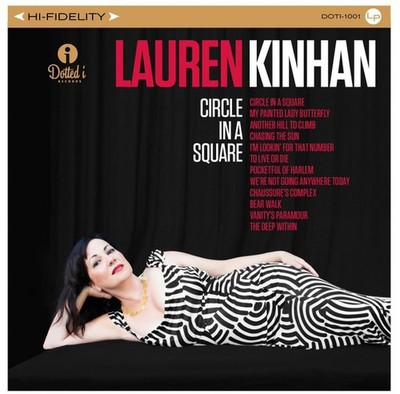 The first thing you notice is her voice, and then her savvy choices. Lauren Kinhan possesses a rare and beautiful instrument, tough and tender, clear and fine-grained in every register, whether she's dipping down into husky chest tones or ascending into silvery head tones. With her glorious sound, she could sing anything and make it a memorable listening experience, but Kinhan is defining herself as an artist by creating her own material, making a compelling case that 21st century jazz singers can thrive outside the context of the American Songbook. Rooted in jazz's improvisational imperative, she knows that you best celebrate the music by remaking it in your own image. Veteran vocalist and composer Lauren Kinhan is at the peak of her form as shown on her latest project, Circle in a Square. Partnered with the great engineer and producer Elliot Scheiner and seed money from a successful Kickstarter campaign, she has unleashed 12 exquisitely crafted songs that mean to push boundaries and buttons. "Beyond how effortlessly and beautifully Lauren sings, I was blown away by what a great songwriter she is," Scheiner says. "Her songs will be considered standards in the future.' Part of what makes Circle in a Square so revelatory is that it provides a rare 360 degree glimpse into Kinhan's musical world. She wrote all the lyrics and almost all the music for every piece, and shaped each arrangement working with her core rhythm section of pianist/keyboardist Andy Ezrin and drummer Ben Wittman (the well-traveled Will Lee and David Finck divide bass duties). The steady personnel provides a cohesive feel throughout the album, while an all-star gallery of special guests contributes instrumental commentary and eloquent solos, such as Brazilian guitar great Romero Lubambo's perfectly sculpted acoustic passage on the intricate, lyric-less "Chasing the Sun" and trumpet maestro Randy Brecker's melodically charged passage on the title track. On the opening track Kinhan sings, "It's a bird/It's a plane", but instead of a Superman sighting, she's hailing music itself. Sounding like a cross between Donald Fagen and Joni Mitchell, the song captures the evocative power of a record spinning on a turntable with a finely etched lyric married to a seductive melody that embodies the very transportive power Kinhan describes. It's a bravura performance, and everything that follows lives up to it's implicit promise. She often makes brilliant use of contrasting musical elements, like the way the jagged piano figure sets off the long sinuous melody of "My Painted Lady Butterfly" (a song tied together by Joel Frahm's serpentine soprano sax solo). She summons the intensity of a gospel singer on the deceptively languorous "Another Hill to Climb," which initially sounds like an uplifting anthem but instead unfolds as a cautionary tale. Whether rapturously becalmed ("The Deep Within"), on the good-time prowl ("Pocketful of Harlem"), or tormented by the search for unknowable answers ("To Live or Die"), Kinhan turns each piece into a self-contained emotional narrative driven by her unerring musical taste. "Think of me as a horn player who sings a lyric or a dancer filling a phrase, a reedy voice that's lived in, adventurous and unapologetic," Kinhan says. "It all circles around living in the moment, telling a story and letting conventions be undressed and re-outfitted."

Here's what you say about
Lauren Kinhan - Circle in a Square.