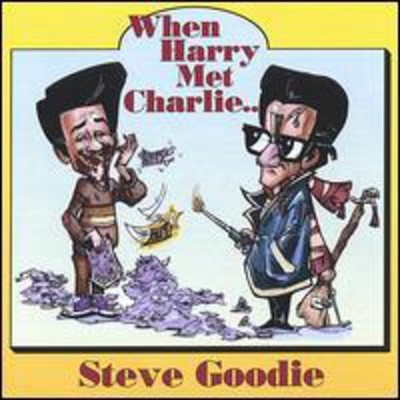 What they're saying about Steve Goodie and his parodies... XM-KiDS [satellite radio] has taken off, and Steve's stuff is a big part of that. His Harry Potter songs are some of our most-requested songs. - Kenny Curtis, Program Director, XM-KiDS radio One of our most talented 21st-century parodists. - Dr. Demento Just heard... 'Dumbledore.' Great stuff! - Jon 'Bermuda' Schwartz drummer for 'Weird Al' Yankovic Weird Al, look out... - Rick Burgess, The Rick 'n' Bubba Show (syndicated morning radio show) My daughter has been begging for the Harry Potter songs. Thank you so much for putting together a CD for kids. I even pre-ordered your new one because I know all my kids are going to want to listen. And listen. And listen. Thank YOU for listening to your 'small' fans!! - Chris Bourgeois, Delavan, WI You REALLY know how to do children's music. I mean... most people who switch from 'normal' stuff to children's music do really stupid boring songs that make no sense and have no point and I just know the CD's must annoy the parents to no end. But not you. You actually make songs about what kids want to hear, and it's appealing to everyone else too. I really like that. - Jace McLain, Germantown, TN I just wanted to tell you I'm a HUGE Harry Potter fan.. as are my kids.. And we heard you for the first time on XM radio this weekend and my 2 year old keeps asking to hear the Harry Potter song! So I have to buy them for them :) Thanx for making us laugh! You do a fantastic job! Great!!! Thank you soo much! I can't wait to receive it! Keep up the good work! I'm sure we will be buying more!! - Amber Sulzynski, Quantico, VA Thanks for doing what you do!! My cousin and I can't get enough of your stuff. We love Harry Potter. - John Hueni IV, USA Love your stuff... played your last CD quite a bit and would love to hear your new one. - Bob Wolf, WPYX, Albany, NY Your CD was the hit of our housewarming party yesterday. It's fun watching people say 'That's so tasteless!' between gasps for air. I loved it! Excellent performance and production, which really makes all the difference with parodies (to me). - Timothy Weber, Ithaca, NY I need this CD now. If you have any love for humanity you will send it now. - Steve Berebitsky, South Bend, IN I first heard your song 'Quidditch Ball Wizard' on the Dr. Demento show and was really impressed. I thought to myself, 'Here is a guy who is even better than Weird Al.' Keep up the good work. - Cecil McDonald, Wichita, KS Good laughs. Thanks again... keep 'em coming! - Dean Metcalf, Producer, The Bob And Tom Show (syndicated morning radio show) You really did a good job with this song [Harry's Wand] and hopefully it will be played for many years to come. You should be considered a role model for others in the music industry. - Debbey Schaffner, Raleigh, NC Once again this fall we're assembling a CD/cassette sampler for our fan club, The Demento Society. I would be delighted to include [your parody] 'Renting' in this project. 'Quidditch Ball Wizard' came through loud and clear. Can I use it on the next show I tape? Thanks for the music! - Dr. Demento.

Here's what you say about
Steve Goodie - When Harry Met Charlie.