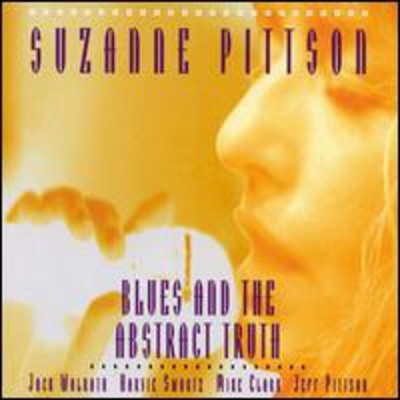 Suzanne Pittson lives in New York and is Assistant Professor of Jazz Vocal Studies at The City College of New York, located in Harlem on 138th & Convent. Called a 'true jazz singer' by Cadence magazine and a 'true musician' by JazzTimes, she is rapidly gaining the respect of the jazz world because of her scatting and technical accuracy, her creativity and musicianship, and her broad improvisational vocabulary. Suzanne's approach to scat singing reveals a deep awareness of the origin and development of the jazz instrumentalist. Jazz Improv says 'her scatting alone is so good that had she been the forerunner and not Ella Fitzgerald, Suzanne would have become the Ella.' And All About Jazz says "Pittson is like an additional horn in the ensemble. Her 'scatting' drives the rhythm section and they respond to her urgings." Suzanne Pittson has performed at many of the country's foremost jazz venues including Birdland in New York, Yoshi's in Oakland, CA, and The Jazz Bakery and Catalina's in Los Angeles, CA. She has performed/recorded with such musicians as Mike Clark, John Patitucci, Dave Liebman, Mark Soskin, Harvie S, Jack Walrath, Dan Haerle, and Jeff Pittson. Suzanne's most recent CD, 'Resolution: A Remembrance of John Coltrane' (1999, Vineland) features unique vocal interpretations of the music of John Coltrane-including 2 movements of 'A Love Supreme'-and is mentioned in Ashley Kahn's 2002 book A Love Supreme: The Story of John Coltrane's Signature Album (Viking). Her bold and adventurous improvisations, based on study of John Coltrane and the post-Coltrane saxophonists, push the development of the jazz singing language into new realms of expression. In the liner notes to 'Resolution' Wayne Saroyan says, 'Pittson's ambitious goal - captured on this brilliant, risk-taking recording-is nothing less than a soulful, heartfelt reinterpretation, and a remembrance of Coltrane's monumental legacy. Part of this remembrance is the fresh lyrical transformation of a musical expression-Coltrane's horn- into a vocal language...Pittson accomplishes both with a stunning virtuosity and a startling clarity of purpose.' Down Beat says, 'she captures the spiritual urgency of 'Trane's music while pushing her voice into ecstatic overdrive.' The recording features a stellar band that includes Alex Murzyn on saxophone, Jeff Pittson on piano, Glenn Richman on bass and Wally Schnalle on drums: all leaders in their own right. Prior to recording this CD, Suzanne (with husband, Jeff Pittson) co- wrote and set lyrics to the four-movement suite 'A Love Supreme' for a performance in 1997 that commemorated the 30th Anniversary of Coltrane's death. Since then she has performed this composition at Coltrane tributes in San Francisco, Los Angeles, Chicago and New York with such musicians as John Patitucci, Mark Soskin, Chip Jackson, and Dan Haerle. Thus far she is the only jazz vocalist to have sung this entire work. Suzanne's 1996 release 'Blues and the Abstract Truth' (Vineland) won strong praise from critics and features a brilliant cast that includes Jack Walrath on trumpet, Harvie S on bass, Mike Clark on drums and Jeff Pittson on piano. Most noticeable on this recording is Suzanne's complete integration into the ensemble as one of the instruments. Rapport magazine responded in kind by saying, 'setting Pittson apart from the others is her sheer dedication to heart and soul through technical accuracy and an uncanny creative ability to find notes where there are none.' Her improvisations impressed Zan Stewart of Down Beat who called Suzanne a 'gusty, informed scatter who knows her chord changes' and Scott Yanow of the LA Jazz Scene who called her a 'masterful scatter' who 'constantly improvises' and whose 'solos are full of surprises and chancetaking.' Suzanne Pittson was born in Oakland, California and as part of a family of jazz musicians, started singing in the church choir when she was 6 and began formal piano lessons at age 9. Though she received training in classical piano, she rubbed elbows with greats of the jazz community from an early age, including pianist Erroll Garner, for whom she performed when she was 12. Suzanne earned Bachelor of Music and Master of Arts in Music degrees from San Francisco State University, where she studied piano with William Corbett-Jones, took jazz history with renowned saxophonist John Handy and studied jazz arranging. In 1978, while still in graduate school, she began singing jazz. Utilizing her many years of piano study as a base, she set out to sing the language of the modern instrumentalists (i.e., transcribing and assimilating horn solos, singing difficult jazz compositions). Vocal study with Jane Sharp in the 1980's, classical voice study with Karen Connor from 1992-2000, and vocal study with opera singers, Valerie Girard and Viviane Mordo in 2006, has further refined her skill. It is because of this assiduous work that she is able to execute complex vocal ideas and arrangements with agility and accuracy. Her major influences are Freddie Hubbard, Carmen McRae, Miles Davis, John Coltrane, Sarah Vaughan, Herbie Hancock and Michael Brecker. Suzanne's most recent project is a vocal interpretation of the music of trumpeter Freddie Hubbard with original lyrics. She currently performs this music live and plans to record in 2006. She also plans to perform John Coltrane's "A Love Supreme" in 2007 to commemorate the 40th anniversary of Coltrane's passing. Jazz writer W. Royal Stokes sums it up eloquently: 'With jazz vocals in the hands of singers like Suzanne Pittson, the future looks very bright indeed. Her supple and strong voice blends with a sure sense of time and a sophisticated way with chord structure. She needs to branch out from her home town and let the rest of the world catch her live.'

Here's what you say about
Suzanne Pittson - Blues & the Abstract Truth.