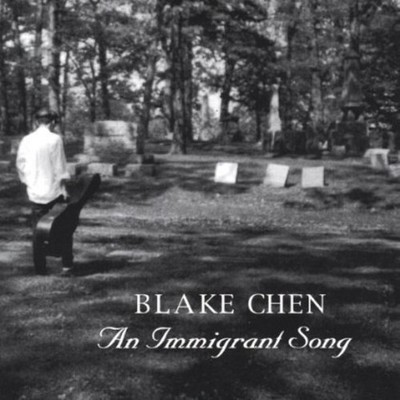 The Wandering Chinaman of San Francisco Introducing Blake Chen By Adam Savetsky Young folk singers at the end of the 20th Century are supposed to spew sexually explicit lyrics, or be ever so cute and quirky, or be mired in identity issues of staggering proportion, but Blake Chen isn't hip to it. He was born in Singapore in 1971, became exposed to a Bob Dylan lyric in a comic book, learned guitar and started singing and playing Dylan tunes. He's lived in Australia, Ann Arbor and since last year, San Francisco. His voice is reminiscent of the young Lou Reed until he goes for the high notes. Then he sounds like Jeff Buckley meets Chinese opera. On the surface his songs are simple but underneath contain layers of complexity. Last year, Chen went into a Detroit recording studio and emerged with a promising eleven song debut CD entitled An Immigrant Song, which delves into the internal struggle at the heart of the inconsolable wandering spirit. Appropriately he has named his label/publishing company 'Wandering Chinaman Songs.' 'In truth, there is really no one else doing what I'm doing,' Chen wrote, during our e-mail interview from Singapore where he's visiting relatives. 'That alone is enough to keep me going.' 'I wanted to make an album in the tradition of Johnny Cash's American Recordings and Dylan's World Gone Wrong,' he explained further, 'just a guy and his guitar but playing many, many roles. On World Gone Wrong all the songs appear to be sung from the point of view of thieves, stalkers, murderers...society's castaways. For An Immigrant Song I had written a whole bunch of songs which sounded, at least to me, as if they were sung by ghosts, demons, angels... voices from the past hiding in the deep caverns of somebody's subconscious mind.' The spiritual heart of the CD is 'All in Vain,' a song that deals with the conflict between the past and present, the living and the dead. Over slow guitar strums, a mournful melody transports the listener into a ghostly dialogue. 'Oh child where have you gone / come out from the shadows,' Chen moans in a weary feminine falsetto that battles for spiritual supremacy over the living. 'Everything you know is wrong your time will come be aware / words reflected by the moon and spoken through lips that have never lied / and now you've broken your promise to those who cried those who died.' But the living are not easily influenced by the dead and take offense at the slightest provocation as Chen reports: 'We're running out of blessings and you built your rings of guilt to form these chains around my heart.' 'We're told time and time again that the lessons of history are eventually forgotten,' Chen wrote me. 'I think it's human nature to ravage the memory of your elders, whether intentionally or not.' Chen was especially interested in how his songs could be interpreted as tragic, though that's not necessarily what he had in mind. 'I wanted the message to ultimately be one of hope, but I guess my moroseness got the better of me,' Chen said. And while he admitted that there often is an 'inherent sadness' in the Chinese world-view, he added, 'there is also humor, a great deal of celebration, and affirmation of life.' 'I grew up in Singapore where the culture has more similarities to the United States than to, say, China,' he continues. '...in any given society there are those who accept tragedy and those who deny it. Then there are those who defy it and I'm one of them... I'm a true romantic...because I recognize the reality, but it doesn't stop me from searching in hope for the ideal.' As if to dispel the idea that Americans couldn't understand what he's talking about, Chen sites Bruce Springsteen along with a lot of traditional American folk music as being reflective of the very same outlook. Other themes worth exploring on the album include the 'internal' immigrant experience on 'Do you Dare,' on which Chen sings plaintively over his sweet campfire guitar picking. 'Take a sip of immigrant cocktail/ before you give in to immigrant fears / and spare a thought for those who dare to fail / before you give in to immigrant tears.' A warning against self-pity, sure, but also a call to the authentic individual to show itself, even in a new and strange land . And as he characteristically challenges at the end, 'Don't you want to make music that bleeds?' The catchy opening track, 'Boats Against the Current' is a Velvetsy rage over the potholes of love: 'Why should it be a comfortable ride / when you won't let me let you inside.' By the end it's turned into a theological rant worthy of Job: 'Oh maker what's going on/ why are your children so eager/ to kill something that's hardly been born.' When Chen goes for the soaring high note at the end of each line it's the exhilaration in his voice that's most contagious. Chen seems to have his own ideas on many subjects including religion: 'I believe in reincarnation though it doesn't occur as often as many believe.' About the East-West dichotomy: 'They work in harmony and are not in conflict.' About the inherent power of music: 'The song is a call to arms, and the enemy to be fought is fear.' And about his own sense of identity: 'Let's just say I'm a child of the universe.' Since moving to town, he and his guitar have been getting gigs at acoustic venues like Brain Wash, Borders Books, Simple Pleasures and The Hotel Utah. His next gig will be at The Hotel Utah on July 30th and he plans to keep on running his own record label and not let the industry insiders, who'd be quick to package him inside a little box, slow him down. A nice example for the rest of us, actually.

Here's what you say about
Blake Chen - Immigrant Song.