Disney is a movie making powerhouse – their Princesses gave us timeless love stories, epic soundtracks and endless hair goals. But behind all the good in Disney’s stories is evil! We’ve met villains that send a shiver down our spines, even if they’re animated.

Who would be the worst of the bunch if the villains could be charged for their crimes in a US court? We took 10 of the most infamous baddies to find out! 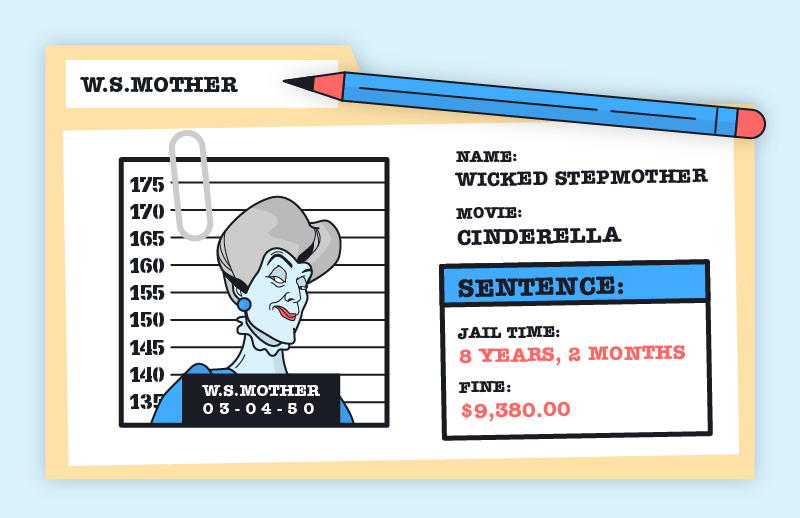 It’s always the stepmoms. After Cinderella’s father dies, her stepmother Lady Tremaine becomes jealous of Cinderella and treats her horribly. So much so, she’d serve jail time as well as paying almost $10,000 in fines for what she has done!

For domestic violence, false imprisonment and criminal damage when she destroys the glass slipper, Lady Tremaine is looking at more than eight years behind bars. But that’s just a drop in the ocean compared to the rest! 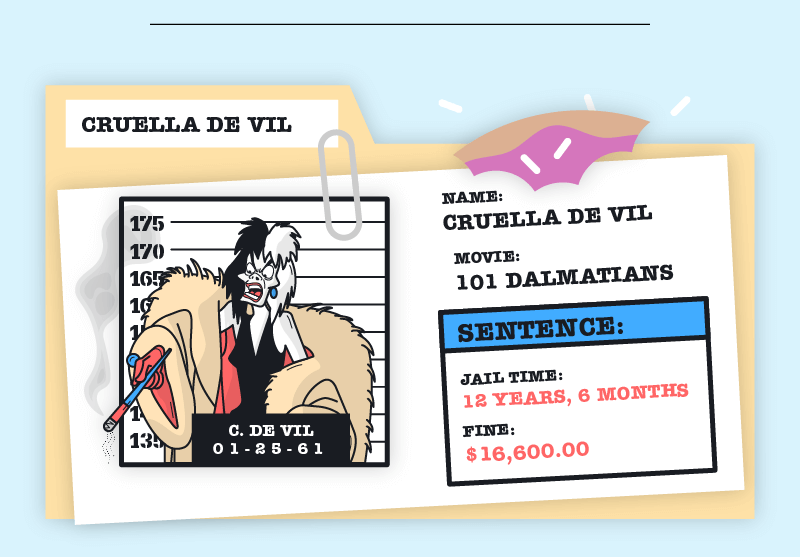 If she doesn’t scare you, no evil thing will. Cruella has her sights set on making a fur coat out of the dalmatians, and has puppies stolen for this purpose. As she steals so many, we can only see that her theft charge would be a felony.

Not only that, she’s guilty of cruelty to animals as well as reckless driving. All three crimes see Cruella in the slammer for more than a decade and parting with $16,600 in fines. 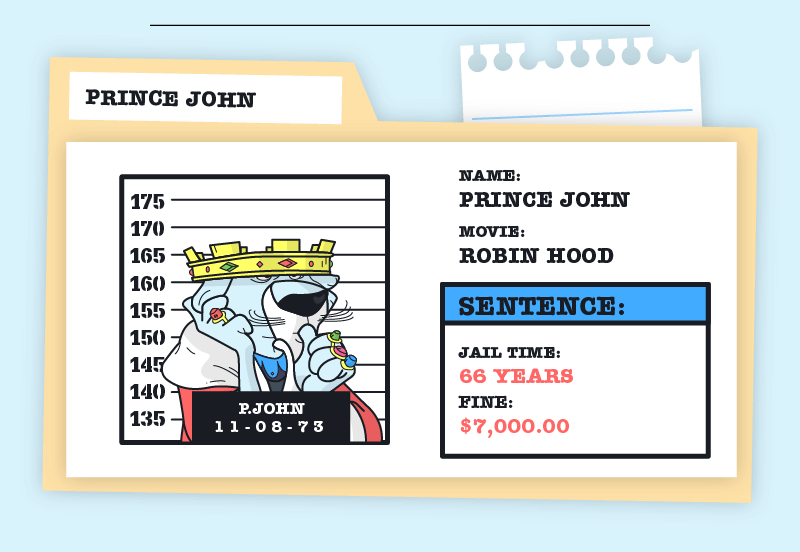 Robin Hood stole from the rich to give to the needy, but Prince John was rich and trying to get richer. His subjects ended up in poverty as he shot up taxes, which lands him with an abuse of power charge.

Prince John is guilty of assault and treason too, meaning he’ll spend the rest of his days in the big house as well as paying thousands in fines! Isn’t it ironic? 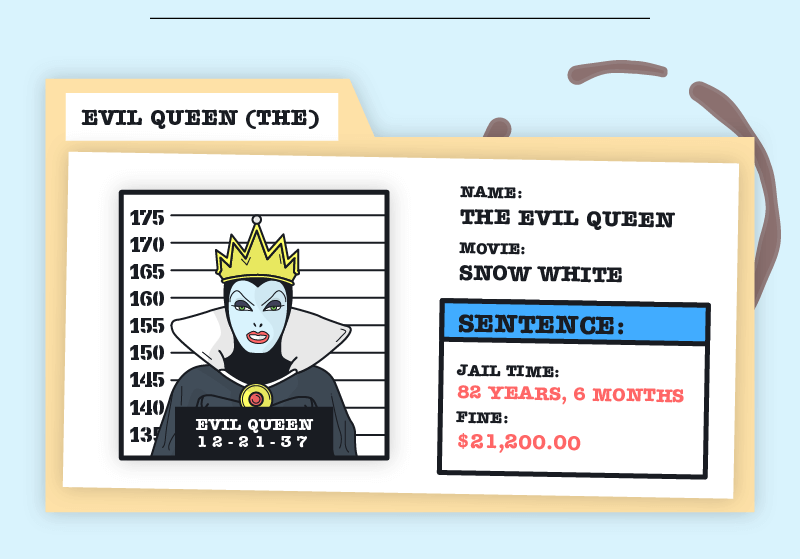 She’s not the fairest of them all, but she’s not the worst villain either. Snow White’s self-obsessed stepmother can’t shake the fact Snow White is fairer than her so, how does she solve this problem? She tries to get rid of it… literally.

Queen Grimhilde is guilty of attempted murder, abusing her power and false imprisonment so she’ll never see the light of day again and she’ll have to part with thousands of dollars in fines. 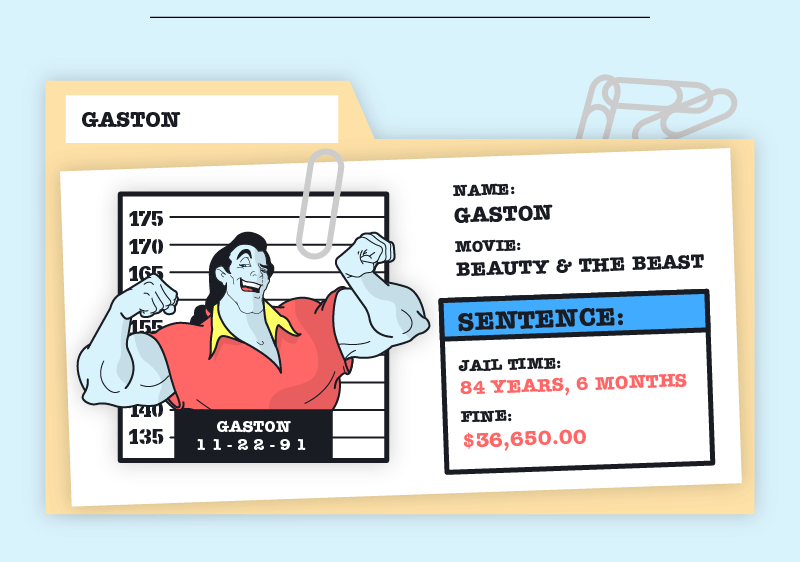 Gaston clearly isn’t used to rejection, which explains why he went on a huge crime spree when Belle spurned his advances. His good looks won’t help him in court either – his huge rap sheet will have him put away for almost 85 years.

The crimes that will end Gaston’s freedom include breaking and entering, bribery and incitement to riot. He’ll have to cough up $36,650 in fines too. Ouch, all that for unrequited love. 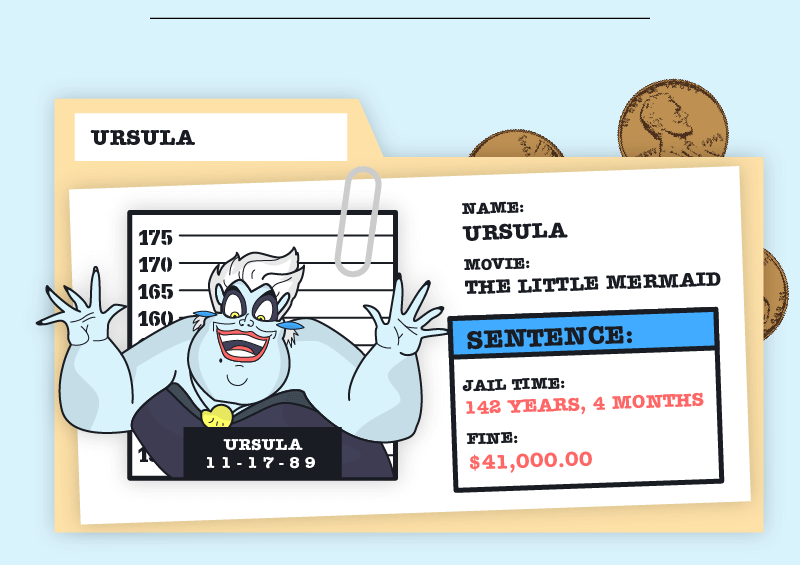 She isn’t the baddest baddie but she might just be the most manipulative. Ursula the sea witch is morally corrupt so it’s no surprise that we find her guilty of fraud... but that charge is just the tip of the iceberg!

For attempted murder, murder, false imprisonment and treason, Ursula is looking at both a hefty fine and jail sentence. 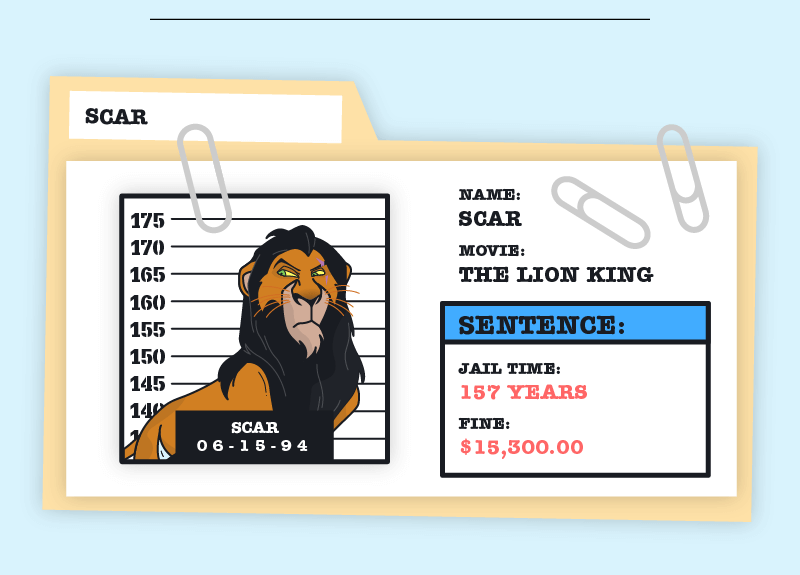 If you think charging a sea witch for her crimes was weird, we’ve got a lion on the stand next. Scar’s unshakeable need to rule over the Pride Lands drives him to murder, child endangerment and assault. His despicable crimes will put him away for life.

More than 150 years behind bars and $15,300 in fines later, we finally have justice for one of the most heartless crimes of our childhoods. Depending on the state, Scar could face the death penalty. 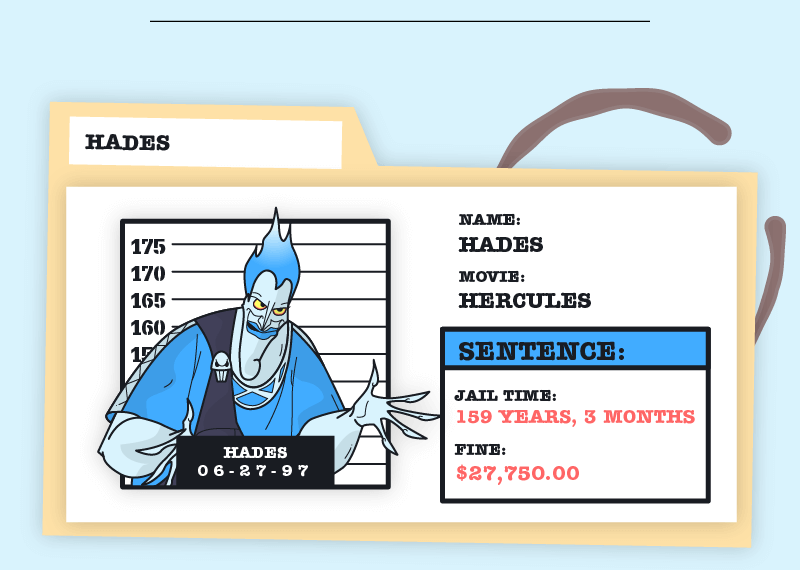 You’d think being a god would be enough, but not for Hades! His brother Zeus is more powerful so there’s only one thing for it – kill off his brother and nephew to rule.

Between the murder, false imprisonment and kidnapping, Hades will be in the slammer for almost 160 years. He’ll have to pay up $27,750 in fines too for his extensive rap sheet. 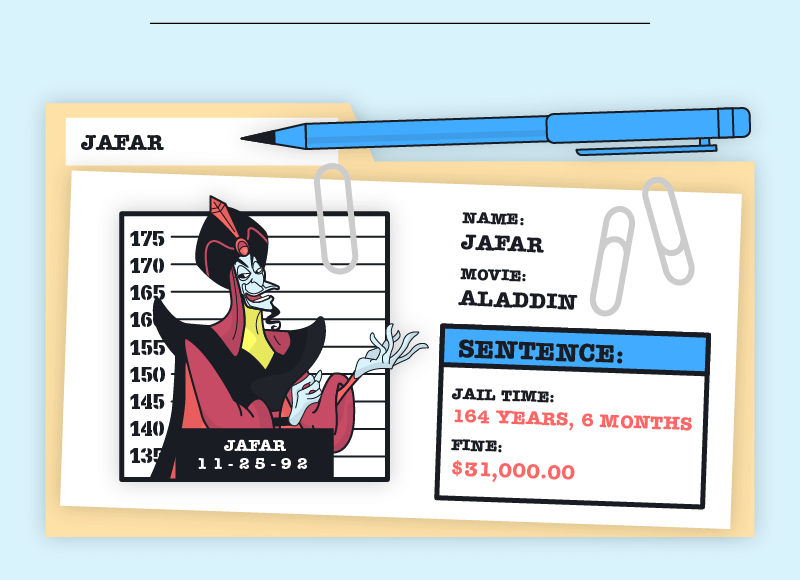 If you think you’re the best man for a job, it’s probably best not to commit a whole heap of crimes to prove your point. Jafar is the Grand Vizier of Agrabah but he’s almost certain he should be the Sultan.

After crossing off treason, attempted murder and theft on his list, he’s going to be put away for 164 years as well as paying $31,000 in fines. 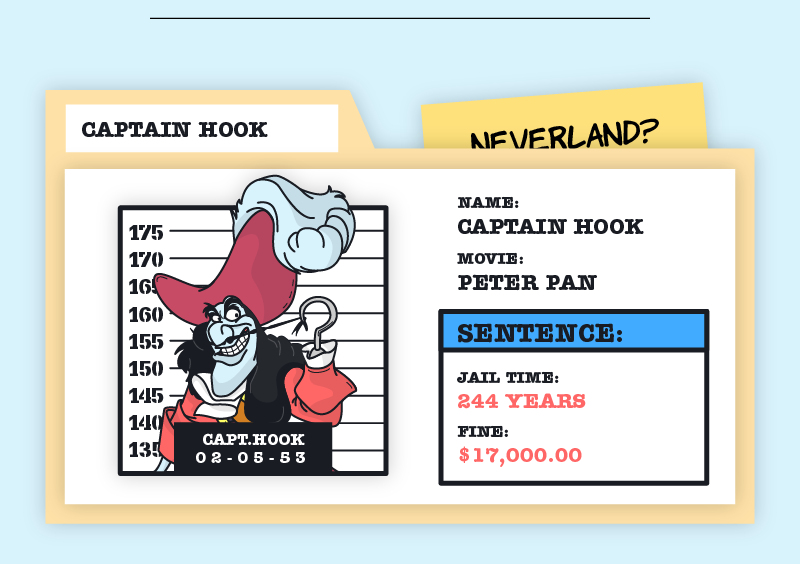 Being a pirate is already an offence so Captain Hook was always looking at a long stretch in the clink! He’s vying for blood with Peter Pan and even kills one of his own men in his quest for Peter. So, when you add up the charges of piracy, attempted murder, murder and kidnapping, Captain Hook’s likely to receive the longest sentence of them all.

With an almost 80 year lead on Jafar, Captain Hook will be behind bars for more than 200 years. Depending on the state, he could even face the death penalty.

You can revisit all the misdeeds of your favorite Disney villains with the Decluttr Store! We have a huge range of Disney DVDs and Blu-rays at incredible prices plus FREE shipping. Treat yourself to some Disney classics today!

Sentencing information sourced from findlaw.com. The prison sentences were calculated using sentencing guidelines for the ten most populous U.S. states: California, Florida, Georgia, Illinois, Michigan, New York, North Carolina, Ohio, Pennsylvania and Texas. Please note, this information is purely for entertainment purposes and may not be 100% accurate or definitive.