We took 10 of the most infamous villains to see how long they’d spend in the slammer, if they were charged in the state of Ohio. 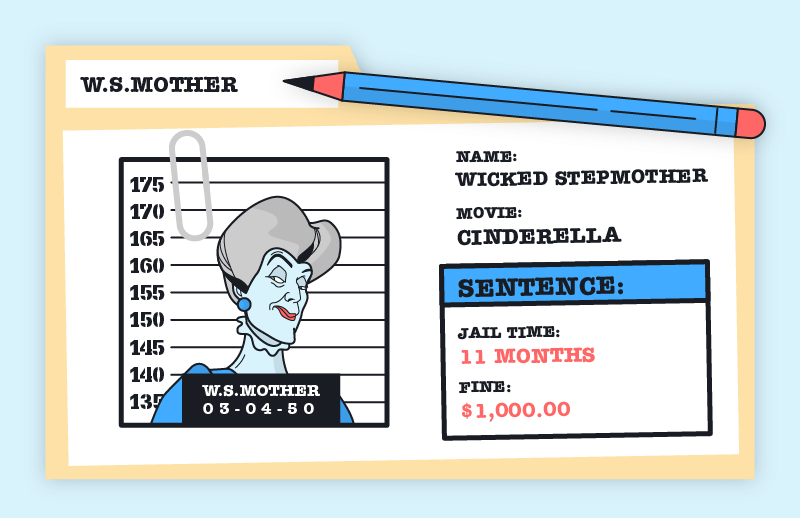 Lady Tremaine may put Cinderella through hell as her stepmother, but she’s not the worst villain we meet. She’s guilty of three misdemeanors which keeps her jail time down to less than a year.

She’ll be put away for a domestic violence charge, unlawful restraint when she holds Cinderella against her will to miss the royal ball and criminal damage as she destroys the glass slipper. 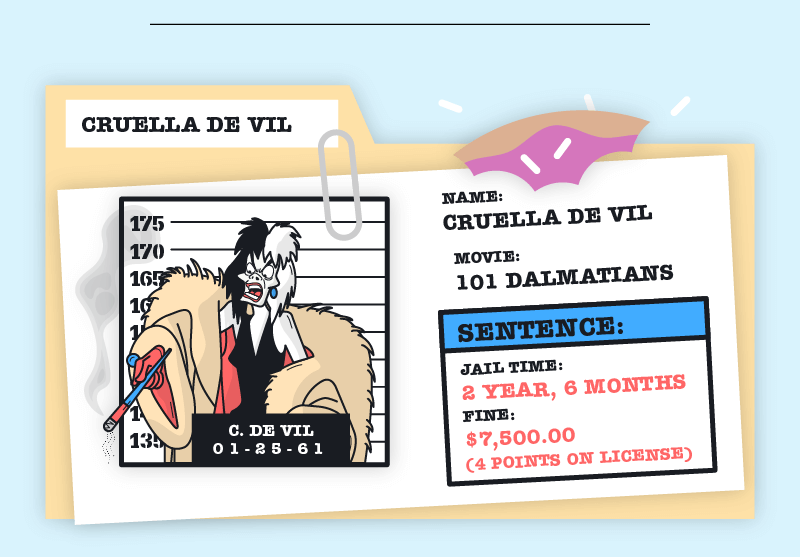 If she doesn’t scare you, no evil thing will – but she’ll be serving time for the terror she ensues! Cruella is also guilty of three crimes; cruelty to animals, theft and reckless driving. With Goddard’s Law coming into effect in 2016, Cruella will face up to a year in prison and a fine.

Her jail time will be bumped up again due to the value of all the dogs, pushing the theft to a fourth degree felony. 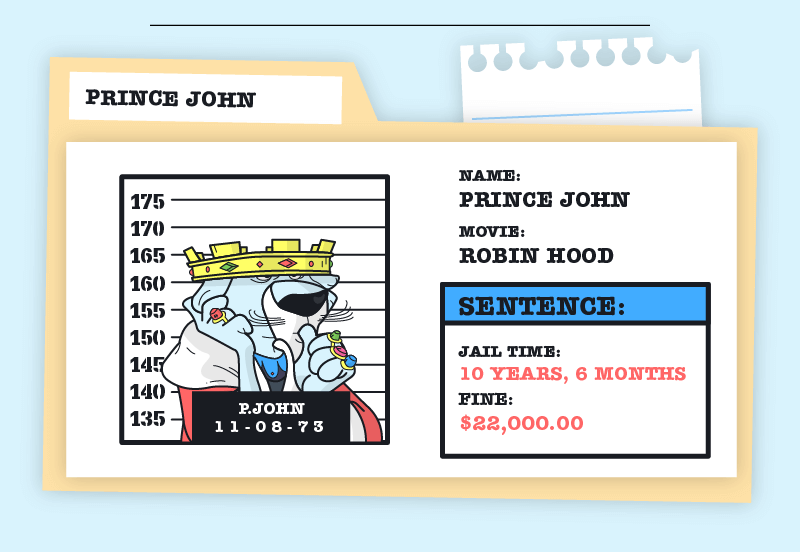 Power destroys most of our villains and Prince John is no different. He’s corrupt to the core as he tries to squeeze ever last penny out of his subjects.

Engaging in corrupt activity will land him in the big house for five years alone as will his treason charge. He’ll get another six months for assault as well as a considerable fine. 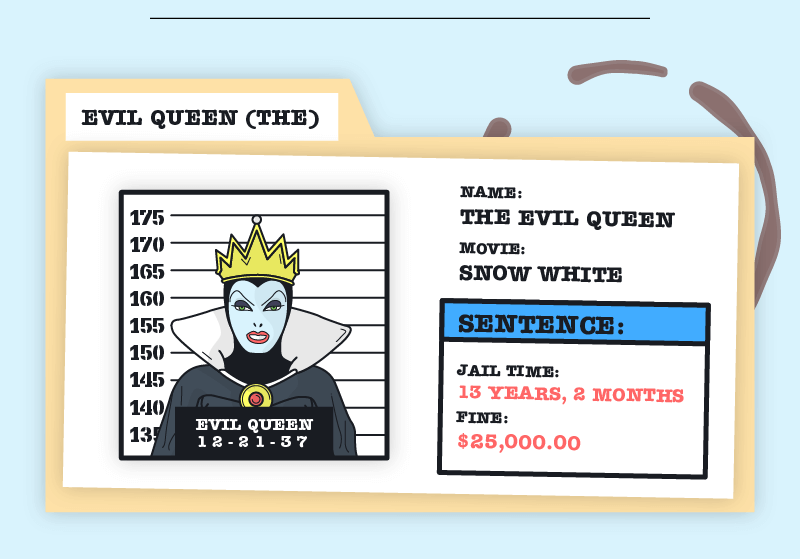 What’s the deal with mean stepmothers? Snow White’s stepmother is the evil queen who is the most self-obsessed of this whole gang. She can’t stand that Snow White could be fairer than her, so she tries to get rid of her problem.

For trying to poison Snow White, the Evil Queen will have to pay off a $15,000 fine as well as spending eight years in the clink. 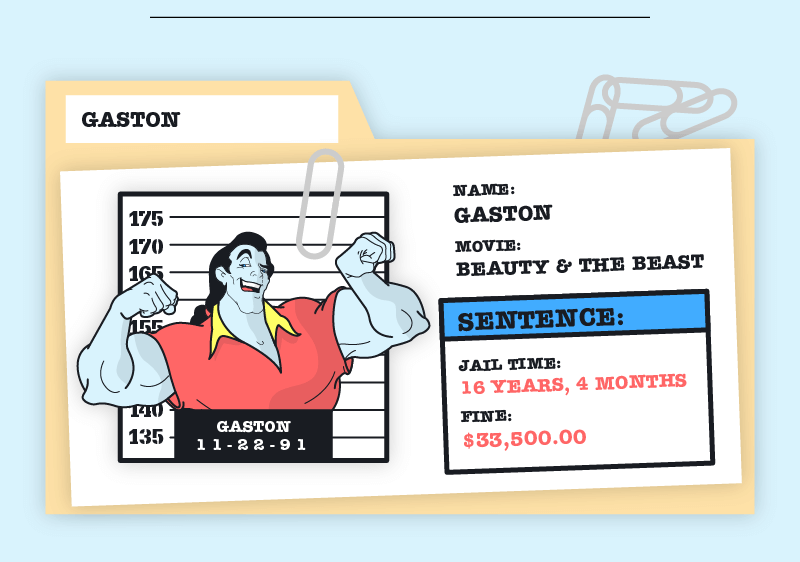 Gaston wouldn’t be the first criminal to use his charms for dirty deeds. In his pursuit of Belle, who luckily sees through Gaston, he tries to kill the Beast, incites a riot and breaks into Belle’s father’s house.

It’s not looking good for Gaston who is guilty of a mix of misdemeanors and felonies – he’ll be put away for more than a decade and he’ll have to pay up a sizable fine. 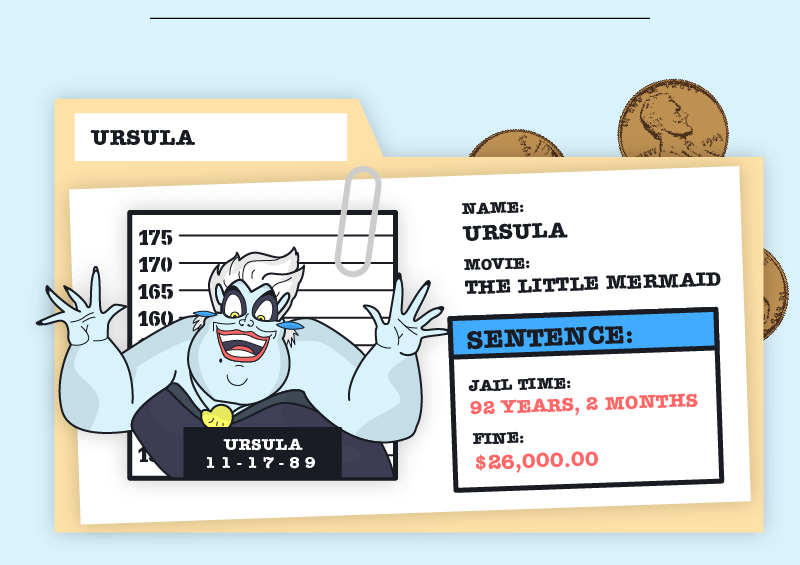 The despicable witch of the sea is all about her own gain, and she’ll stop at nothing to get what she wants. She takes Ariel’s voice in a trade for a pair of legs, which allows her to commit fraud.

For the crimes we know she has committed (because who knows who else she’s manipulated?), she’ll be in the slammer for the rest of her days. 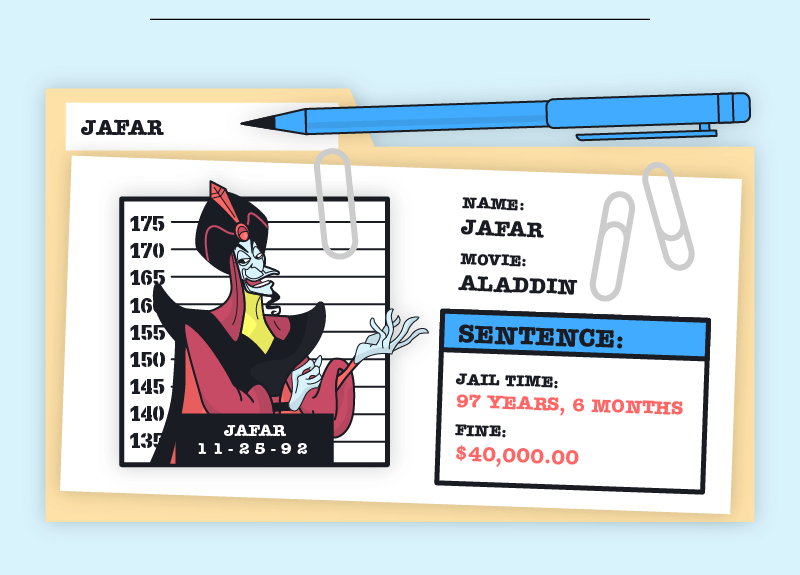 There may be fan theories that suggest Jafar isn’t all that bad, but an Ohio court would likely judge him as one of the worst! He’ll be locked up for the best part of 100 years for his extensive rap sheet that includes kidnapping, theft and treason.

He may have thought he was the best man to rule Agrabah, but he’ll probably never see it again. 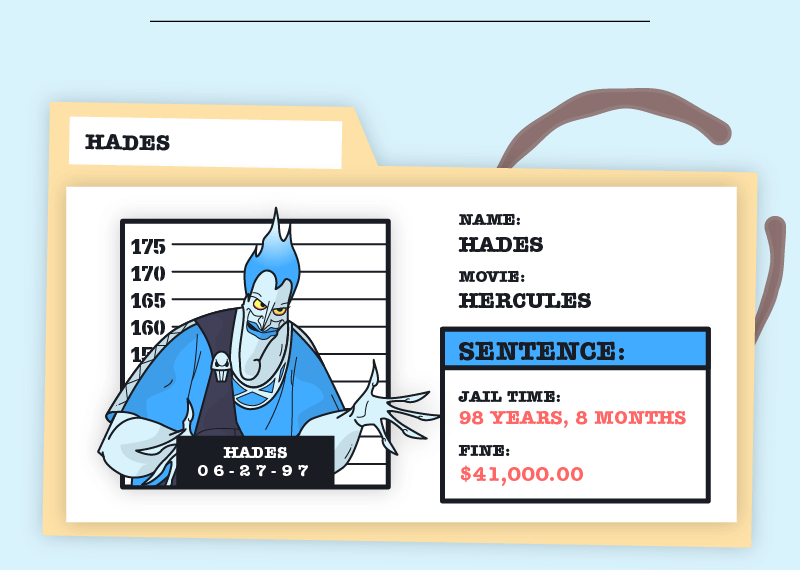 Even though he has more power than anyone else on this list, he ends up committing some of the worst crimes which lands him one of the longest sentences of all our villains.

He has charges of false imprisonment, abuse of power and kidnapping against his name. The majority of his crimes are felonies, adding up to an almost 100 year sentence! 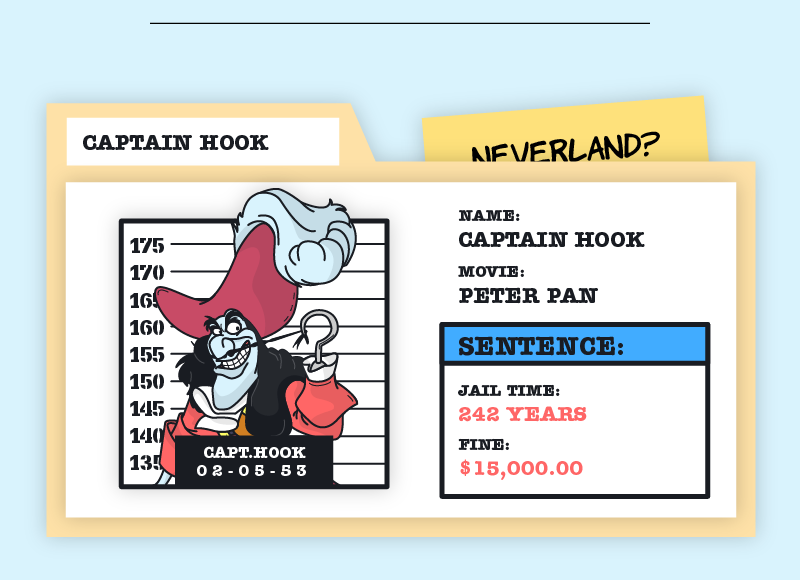 Revenge can be sweet, but for Captain Hook, it’ll take away his freedom for a long, long time! Hook faces the longest jail sentence of all our villains, but one villain is considerably worse than he is. Each of his crimes are felonies, equating to a substantial sentence each. 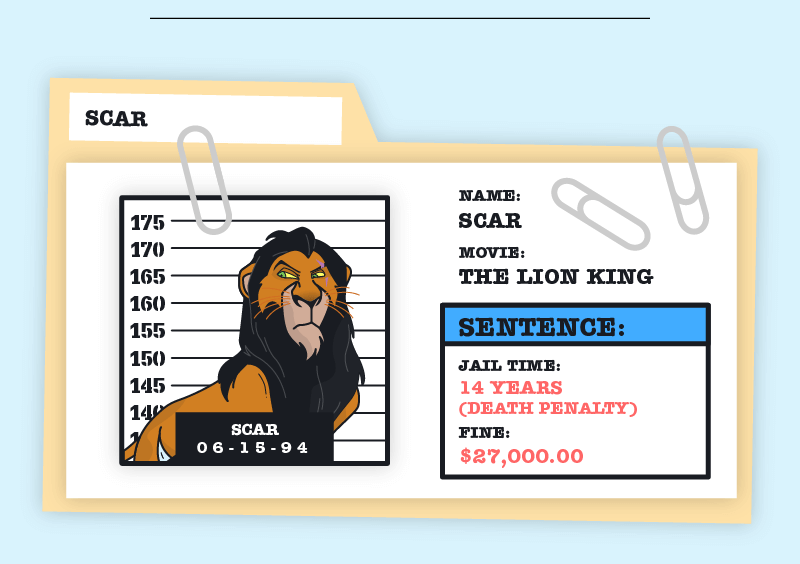 Scar’s destructive path to ruling the Pride Lands will remove his freedom in the long run. He’s guilty of five crimes in total like child endangerment, assault and treason.

As he killed his brother Mufasa, who is the King of the Pride Lands, Scar too will lose his life. Assassinating a public official will mean Scar faces capital punishment along with the fines he racked up from the other crimes.

Treat yourself to some Disney classics with the Decluttr Store! We have a huge range of Disney DVDs and Blu-rays at incredible prices plus FREE shipping.

Sentencing information sourced from findlaw.com. The prison sentences were calculated using sentencing guidelines for the State of Ohio. Please note, this information is purely for entertainment purposes and may not be 100% accurate or definitive.