We took 10 of the most infamous villains to see how long they’d spend in the slammer, if they were charged in the state of North Carolina. 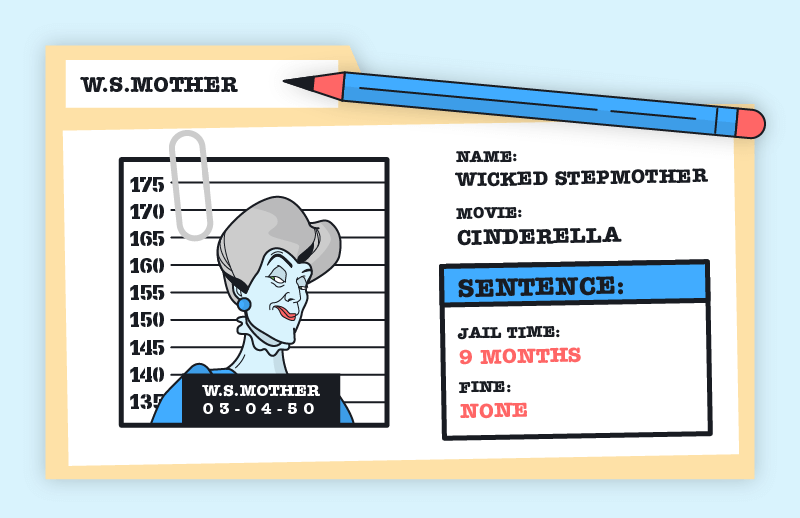 Lady Tremaine may be dubbed wicked, but she isn’t the worst villain we’ve met. Each of her crimes are misdemeanors so she’ll face a prison sentence but she won’t even be away for a full year.

She treats Cinderella terribly after her father dies, so we’re pretty clear that she’s guilty of child endangerment as well as false imprisonment and destruction of property. 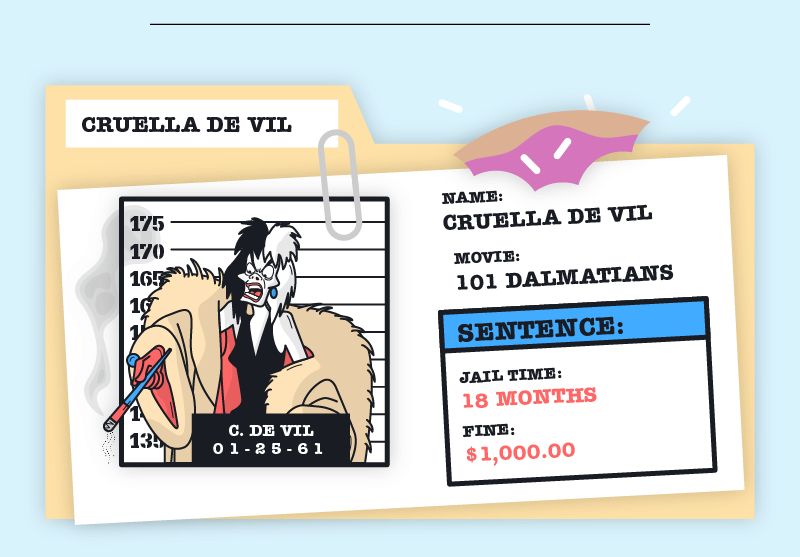 The aptly named Cruella de Vil of Hell Hall is a relatively low-level criminal compared to some of the others.

She’ll end up behind bars for a year and a half with the best part of this sentence coming from her theft of the dalmatians. That felony puts her away for a year alone! 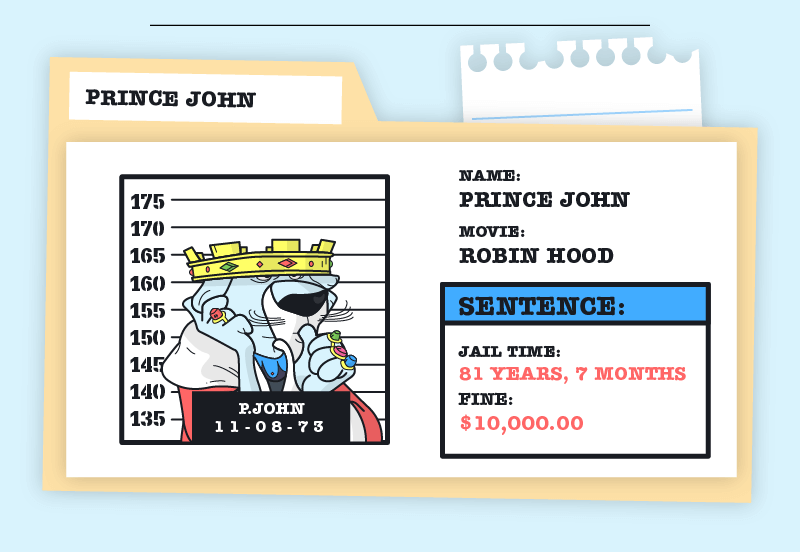 There’s a steep jump in sentence for this next villain! Prince John shows us his morals are a little out of whack.

Taking the throne in his brother’s absence, he makes the lives of his subjects miserable, taking as much money as he can from them to leave them in poverty. Corruption, assault and treason all add up to a sentence of more than 80 years. 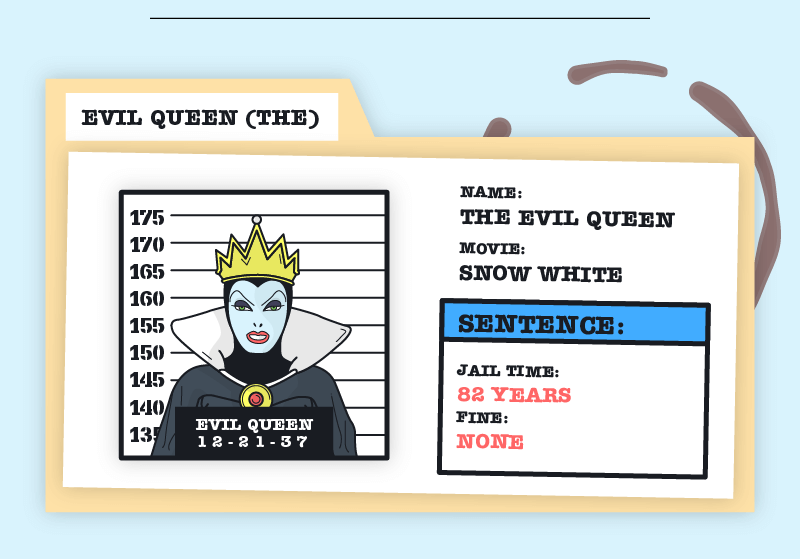 Disney doesn’t exactly paint a good picture of a stepmom! Queen Grimhilde struggles to deal with the fact that she isn’t the fairest of them all.

The self-absorbed evil queen tries to poison her stepdaughter Snow White which isn’t taken lightly in North Carolina. That alone lands her a life sentence in the slammer, but she’ll serve extra time for corruption and false imprisonment. 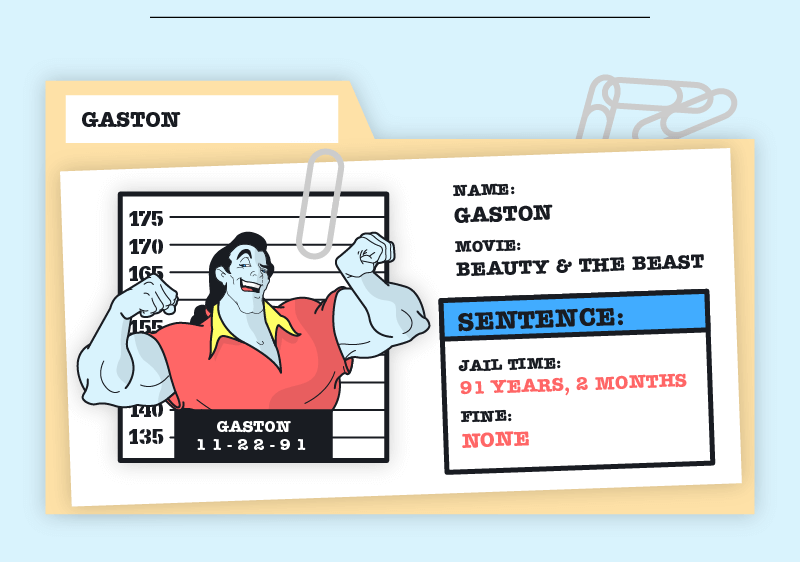 Is there anything worse than unrequited love? Well, yes… how Gaston deals with it. When his advances are spurned by Belle, Gaston ends up on an almost murderous rampage to win her over.

The narcissist has one of the longest list of crimes to his name and is the only villain to be guilty of inciting a riot. Hell hath no fury like a Gaston scorned.

Ursula is one of the cleverest villains you could meet, but preying on the vulnerable will come back to bite her in the tentacles.

She strikes up a deal with Ariel – taking Ariel’s voice and giving her a pair of legs in return – which she uses to commit fraud. Not only that, she’s guilty of false imprisonment, treason and attempted murder. 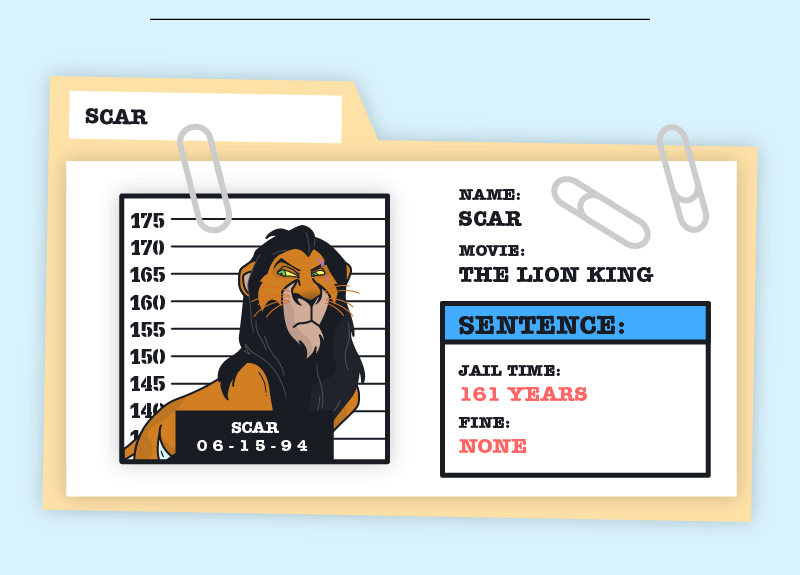 We can all agree that Scar is downright despicable, killing off his brother and convincing his nephew it was his fault in order to claim the throne over the Pride Lands.

He does get a heavy sentence himself for the atrocities he puts his family through. In North Carolina, he’ll get a sentence of more than 150 years so you can rest easy knowing this monster has been put away! 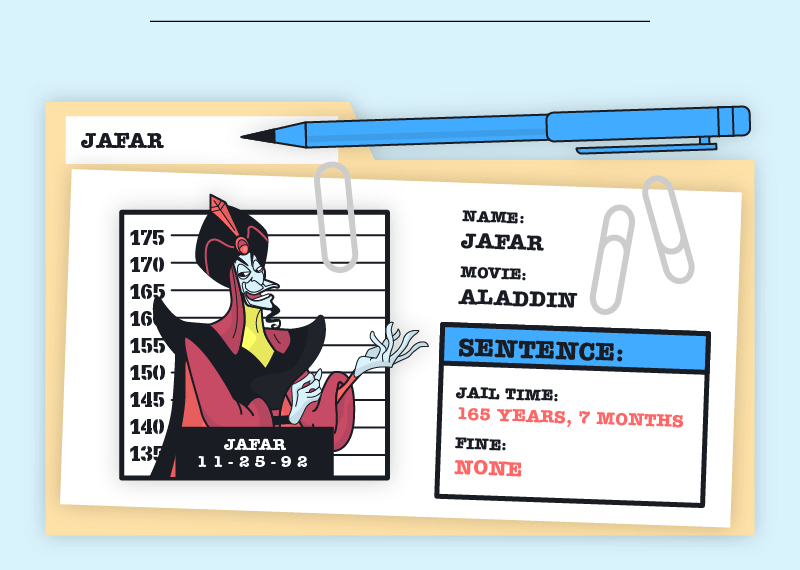 Another character who succumbs to the need to rule, Jafar is in for a long stretch in the clink. The Grand Vizier’s list of crimes is packed with felonies which dish out a bigger sentence.

He’ll be put away for treason, attempted murder, kidnapping, corruption and theft! It’ll be a whole new world for Jafar in the big house… 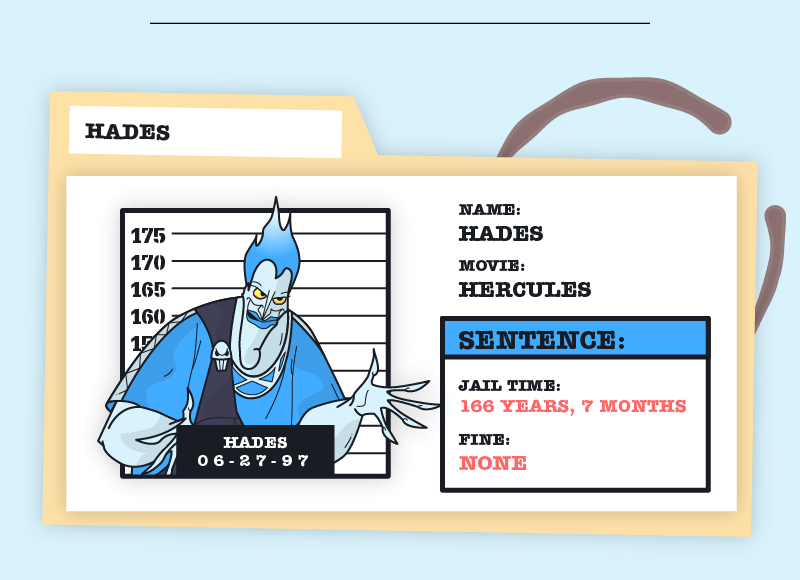 Hades has more power than any of his evil compadres, being a god, but that doesn’t put him above the law. Like Scar, Hades wants to bump off his brother and rule over a kingdom.

In his path for domination, Hades commits six crimes including child abuse, treason and false imprisonment. 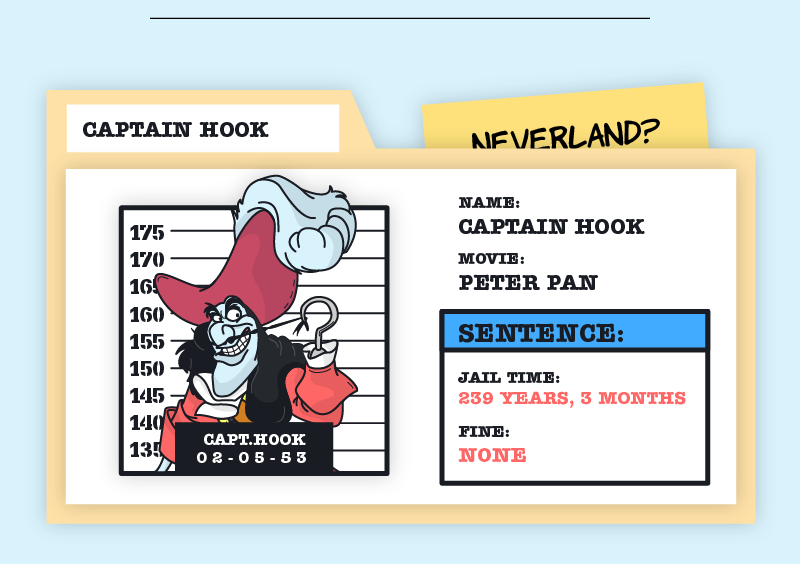 The worst of the worst by a difference of almost 75 years is Peter Pan’s nemesis Captain Hook. The tyrannical pirate seeks revenge on Peter after their last battle, committing only felonies but it’s enough to put him away for more than 200 years.

Although Blackbeard used to roam North Carolina, Hook will be safely put away in a correctional facility!

Check out all the misdeeds of your favorite Disney villains with the Decluttr Store! We have a huge range of Disney DVDs and Blu-rays at incredible prices plus FREE shipping.

Sentencing information sourced from findlaw.com. The prison sentences were calculated using sentencing guidelines for the State of North Carolina. Please note, this information is purely for entertainment purposes and may not be 100% accurate or definitive.