We took 10 of the most infamous villains to see how long they’d spend in the slammer, if they were charged in the state of New York. 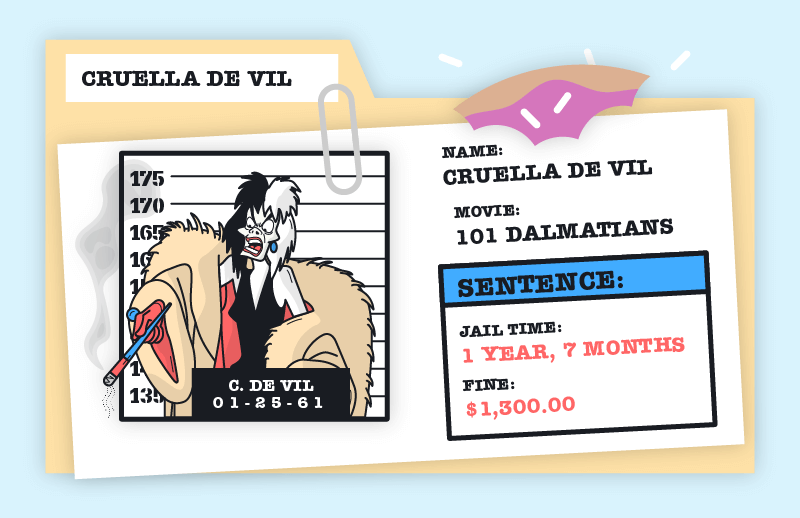 Her intentions may be far from honorable, but Cruella de Vil is the best of a bad bunch. Miss de Vil is guilty of cruelty to animals (she is trying to make coats out of them), companion animal stealing and reckless driving.

She would be heading to jail for just one year and seven months, and she’d have to part with $1,300 in fines. 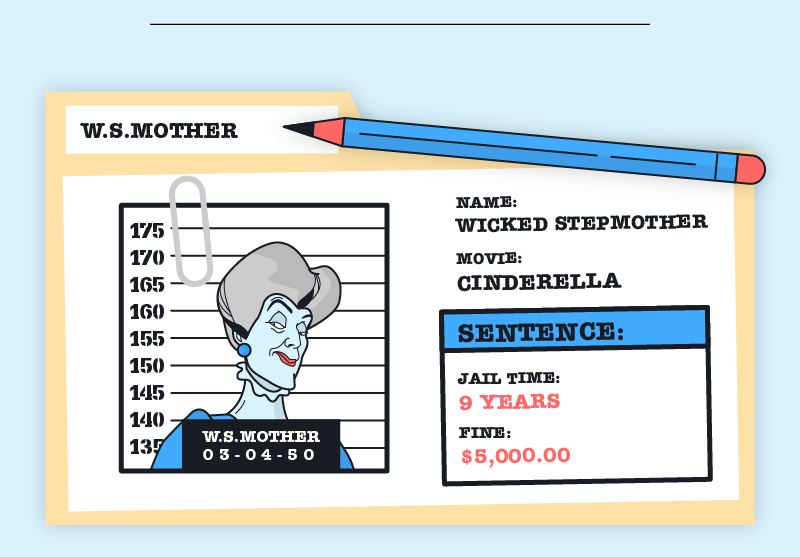 The clue’s in her name – Cinderella’s Wicked Stepmother is guilty of three crimes in the terror she puts her stepdaughter through.

The false imprisonment of Cinderella so she misses out on the ball lands The Wicked Stepmother with a misdemeanor charge, but she’s also guilty of child cruelty and criminal mischief after she smashes the glass slipper. 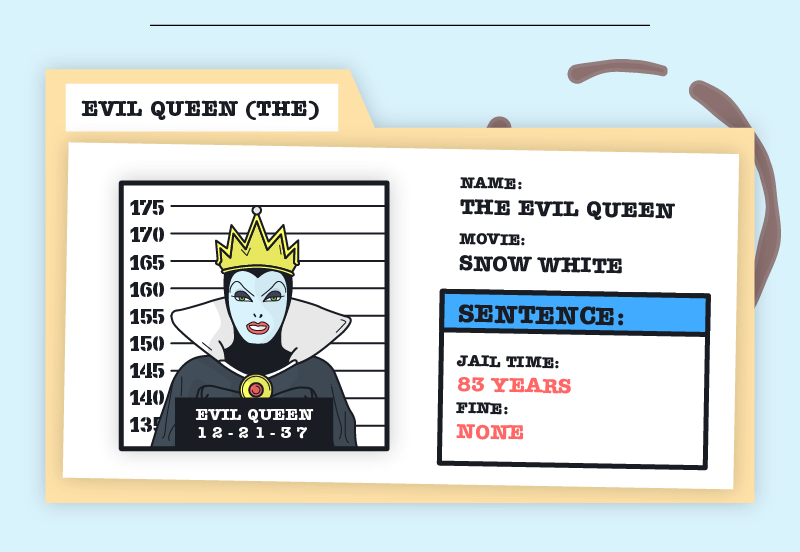 There’s being wicked, and there’s being evil. Snow White’s horrible stepmother will spend the remainder of her life in the slammer – not because she’s committed more crimes than the others so far, but because the crimes are a lot more serious.

Queen Grimhilde is guilty of false imprisonment and abuse of power but the biggest part of her sentence comes from the attempted murder of Snow White through a poisoned apple. 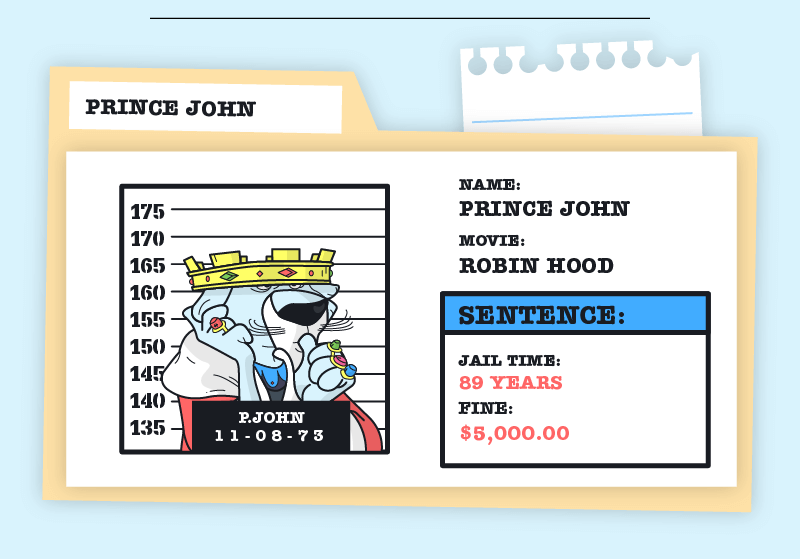 Robin Hood wants to steal from the rich to give to the needy, but Prince John wants to make the poor poorer and himself richer.

His official misconduct charge will land him in the big house for a year, but that’s the least of his worries. A charge of treason and assault will see him behind bars for the rest of his days! 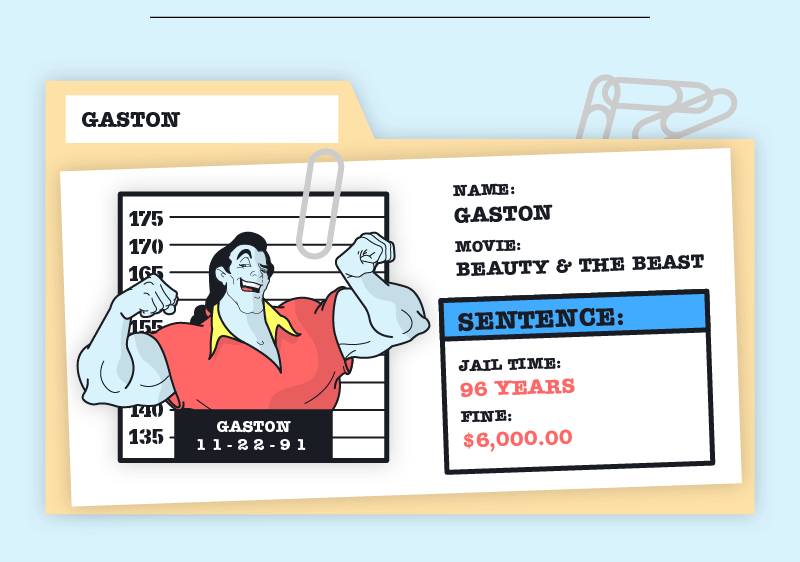 Don’t let his good looks fool you; Gaston is bad to the bone! In his attempts to win over Belle, Gaston resorts to some terrible crimes like coercion, bribery and inciting a riot.

Those are small time compared to the attempted murder charge he’ll get handed for trying to get rid of his love rival, the Beast. He won’t be able to charm his way out of this one – he’ll be in prison forever. 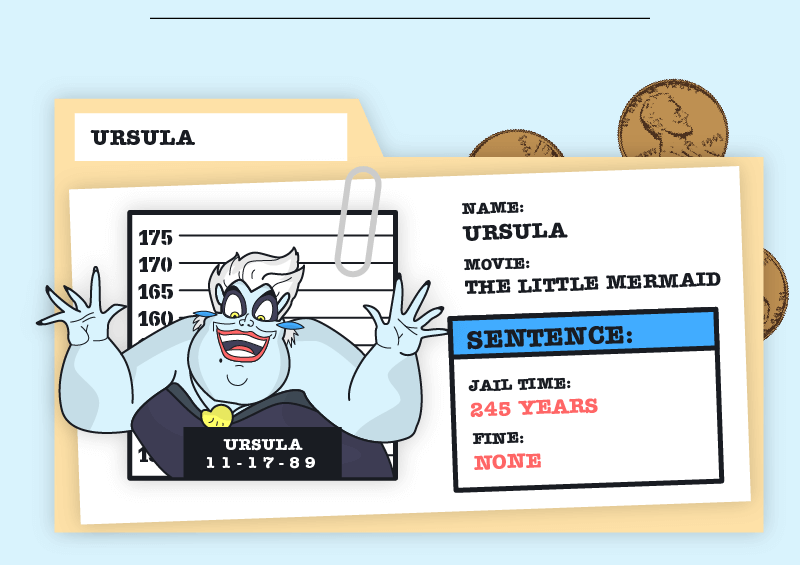 You’ll be hard pressed to find a more manipulative villain than Ursula! She preys on the vulnerable and schemes her way to the top.

The long arm of the law will come down on her wicked ways though, as she’s looking at a sentence of over 200 years. That’s due to some serious crimes like treason, attempted murder and murder which all carry life sentences. Ariel won’t have to worry about Ursula anymore! 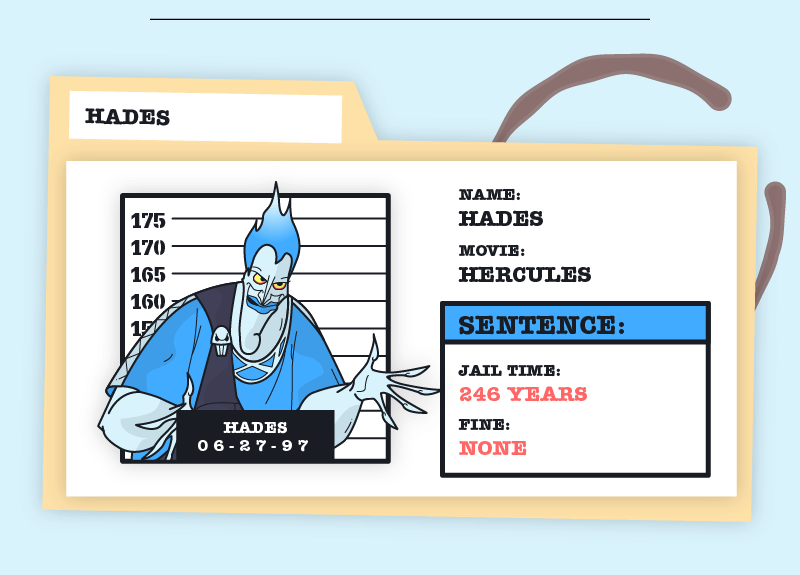 Hot on Ursula’s heels is Hades, who’s got a similar stretch ahead of him.

Trying to overthrow Zeus takes a lot of effort and plenty of illegal activity. Hades racks up a long rap sheet of crimes including kidnapping, child endangerment and official misconduct. Both felonies and misdemeanors soon add up and it’ll be a long time before he’s out. 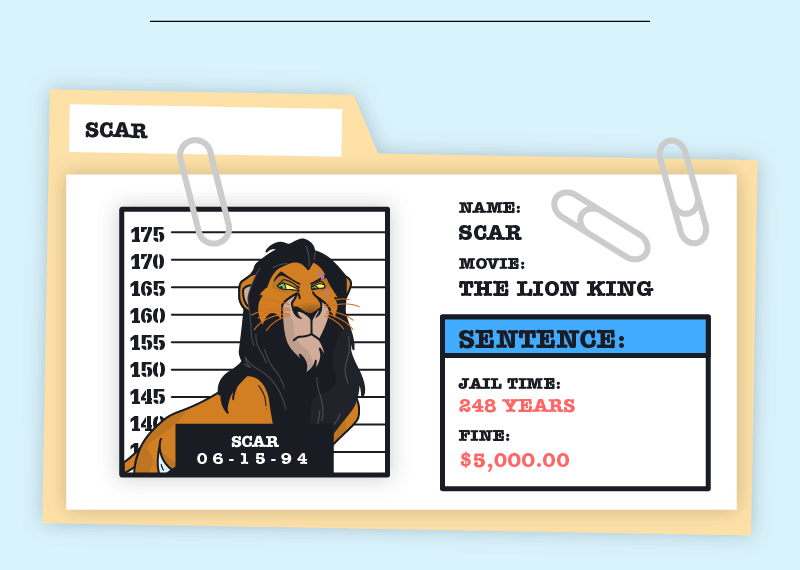 It’s probably no surprise that Scar is one of the baddest baddies Disney gave us. He sees his brother Mufasa leading over the Pride Lands and he wants a piece of the action – only problem is, now his nephew Simba is next in line for the throne.

To eliminate this problem, he kills off his sibling and attempts to get rid of Simba too. When justice reigns, it’ll land him with an extended prison sentence and a fine. 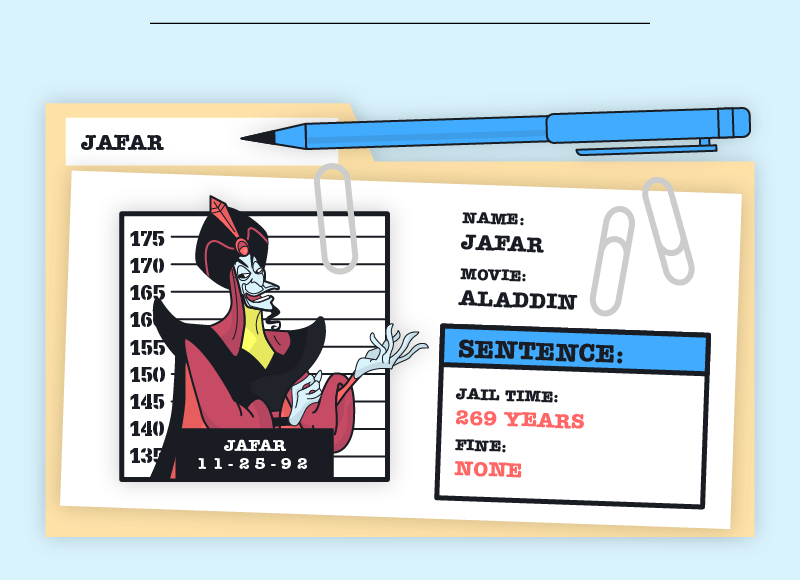 The Sultan of Agrabah places a lot of trust in the Grand Vizier but little does he know Jafar is coming for his crown.

The power-hungry villain goes through any means necessary to get what he wants, but that’s not going to hold up in court. We’ve found him guilty of treason, attempted murder and larceny as well as kidnapping and official misconduct. 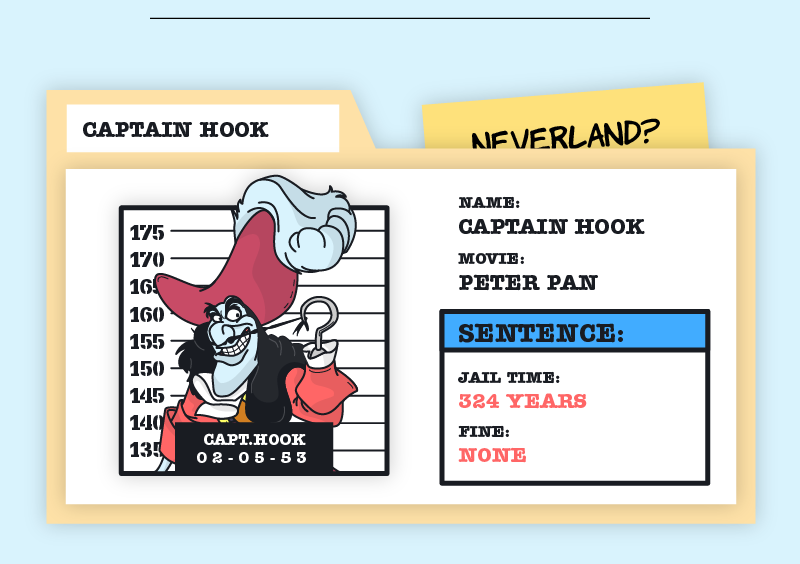 The worst of the worst, the baddest baddie of them all, is Captain Hook. His profession alone serves him a mandatory life sentence but it doesn’t end there!

Hook is hell-bent on revenge against Peter, and without a conscience, he partakes in some serious criminal activity. Each of his four crimes carries a life sentence so he’ll go away for more than 300 years – Peter wins this battle too!

Discover how each villain faced justice in the movies with the huge range of Disney DVDs and Blu-rays on the Decluttr Store, all at incredible prices plus FREE shipping.

Sentencing information sourced from findlaw.com. The prison sentences were calculated using sentencing guidelines for the State of New York. Please note, this information is purely for entertainment purposes and may not be 100% accurate or definitive.