We took 10 of the most infamous villains to see how long they’d spend in the slammer, if they were charged in the state of Michigan. 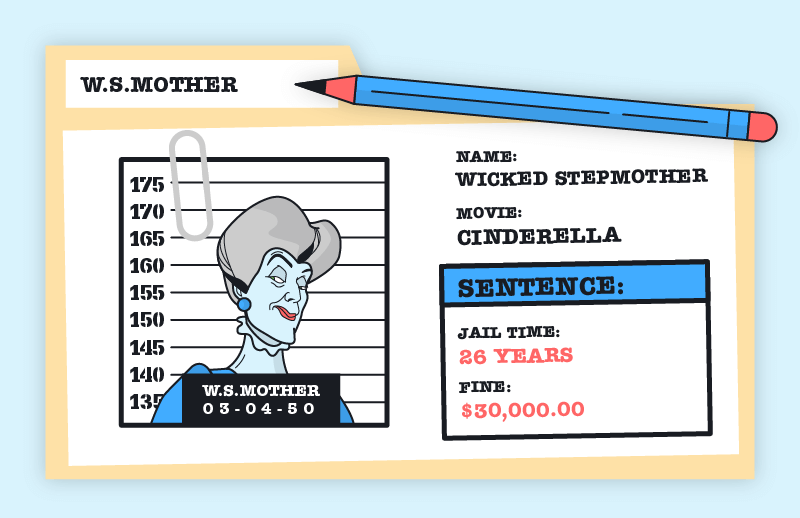 Cinderella’s stepmother may be mean but she commits the least serious crimes of this pack.

Her treatment of Cinderella falls under child abuse which tallies just a year in the slammer, but the false imprisonment of her stepdaughter means she’ll get put away for another 20 years. With the value of the all-important glass slippers, destroying them will see Lady Tremaine spending another five behind bars. 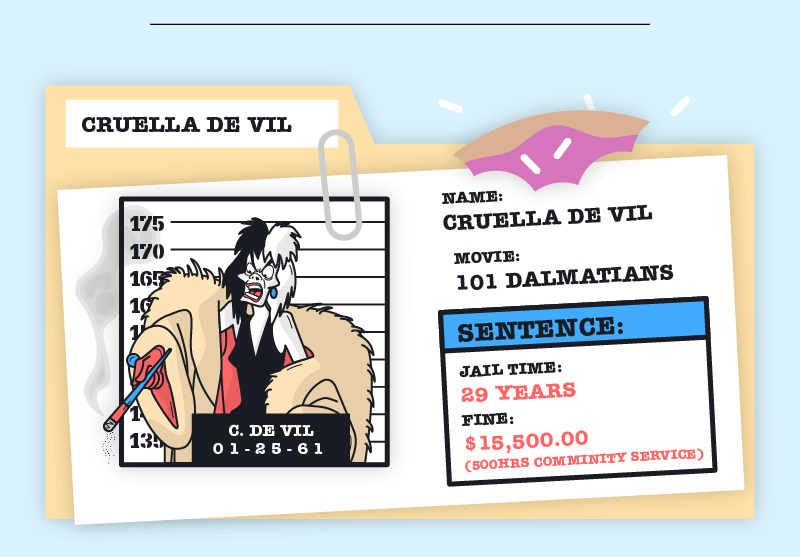 No evil thing could possibly scare you as much as Cruella de Vil but her jail term would be less than 30 years if she’s convicted in the state of Michigan.

She’ll be thrown in a cell for the theft of the dogs, the cruelty she puts them through as well as her reckless driving. All in all, she’d spend 29 years in the clink but she’ll also need to do 500 hours community service. 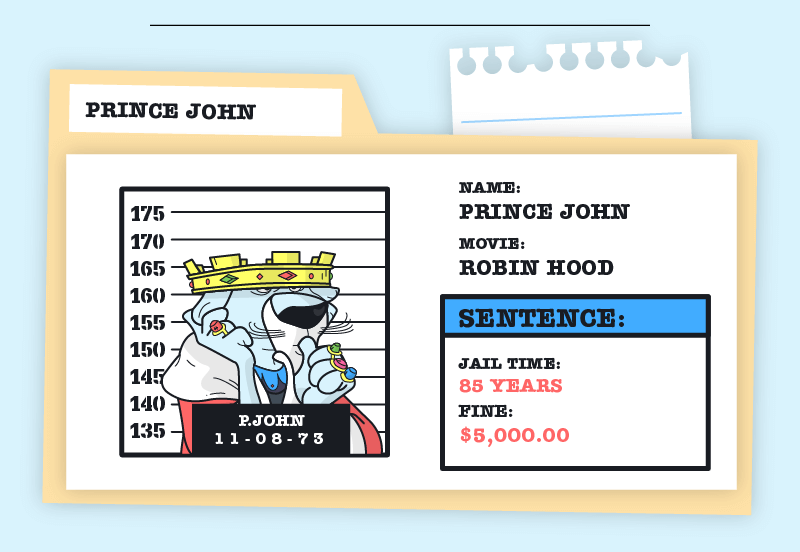 Sneaky Prince John won’t ever rule now as he’ll be locked up for as long as he lives. He’ll be handed a life sentence for treason but received another four years on top of that for abusing his position of power and hiking up taxes for his own gain.

John also owes thousands in fines – which is pretty much the opposite of what he’d wanted to achieve. 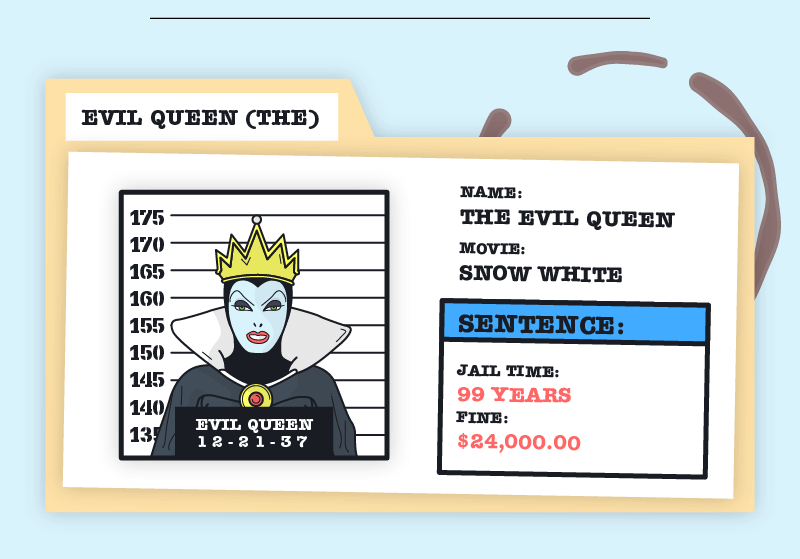 Evil she is; Snow White’s stepmother and tormentor will be put away for almost 100 years for her wicked ways.

The bulk of the sentencing will come down to an attempted murder charge; Queen Grimhilde tries to kill off Snow White with a poisoned apple when she’s told Snow White is fairer than she is. Not only that, she’s guilty of abuse of power and false imprisonment. 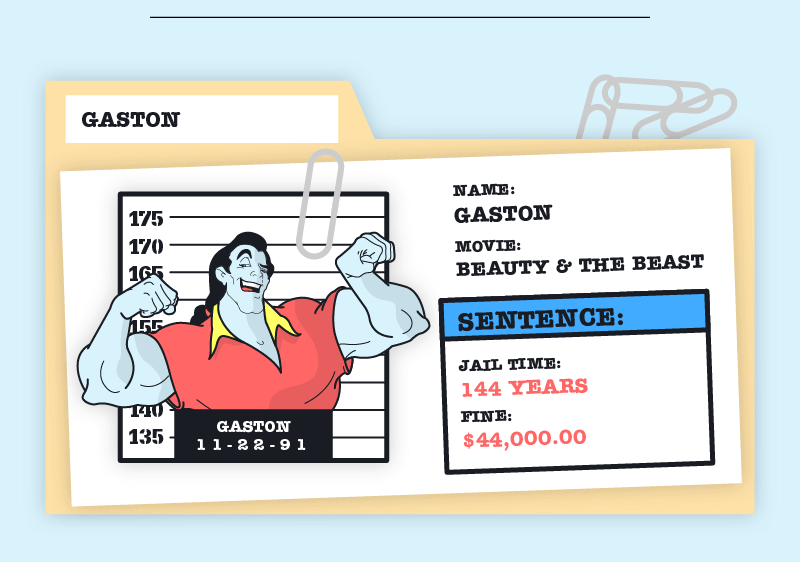 He’s big and burly – but he doesn’t take rejection very well. Gaston believes he is the man for Belle, but she isn’t on the same page.

Her lack of understanding behind his sheer importance sends him on a criminal rampage. He breaks into Belle’s home, incites a riot and tries to kill off the Beast. There are plenty of other girls, Gaston! He’ll spend his best years behind bars. 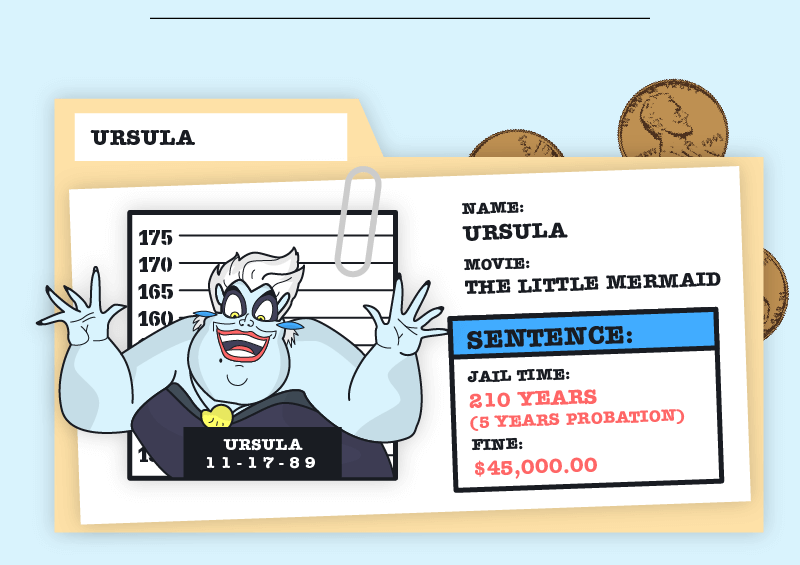 Ursula, the sea witch, dupes those less fortunate than herself under the guise of being helpful. She takes Ariel’s voice and gives her human legs in return, but she then uses Ariel’s voice in fraudulent ways. 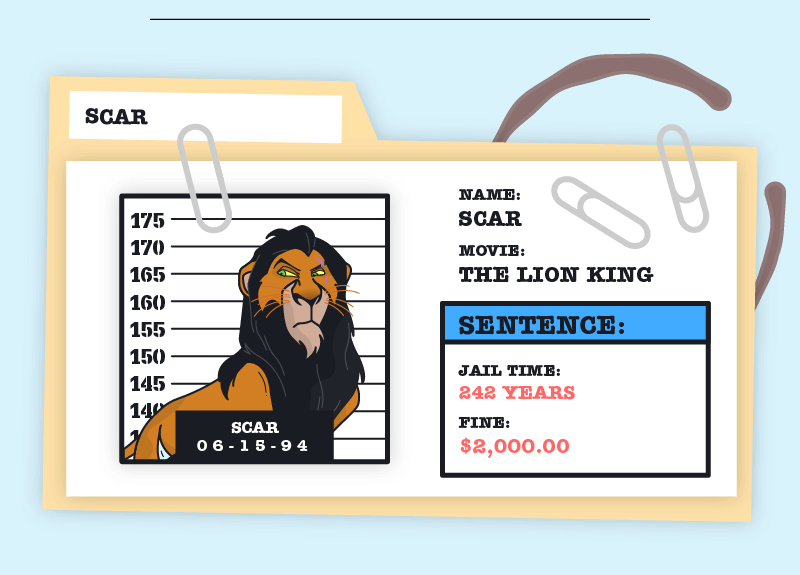 Who knew lions could be so cut throat and sinister? Scar’s desire to rule the Pride Lands leads him on a cold-blooded murder spree – or at least, it almost does.

He gets rid of his brother Mufasa but his nephew Simba is next in line for the throne. Simba is then convinced he’s to blame for his father’s death so Scar gets his wish. His crimes equate to a 242 year prison sentence and a $2,000 fine. 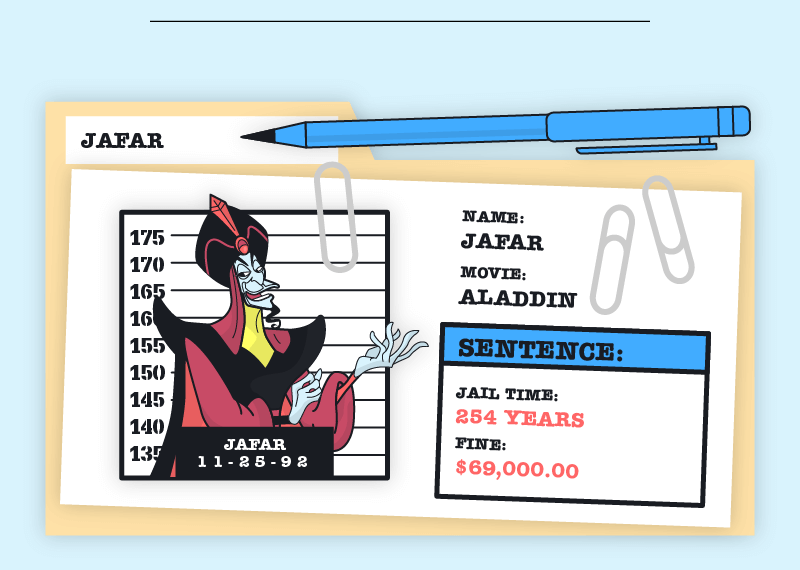 The Grand Vizier of Agrabah is a prestigious title and to be the most trusted advisor to the Sultan is an honor! Despite his position, Jafar wants more – just like many of our villains – so to have all of his wishes, he commits treason, theft and even attempted murder. 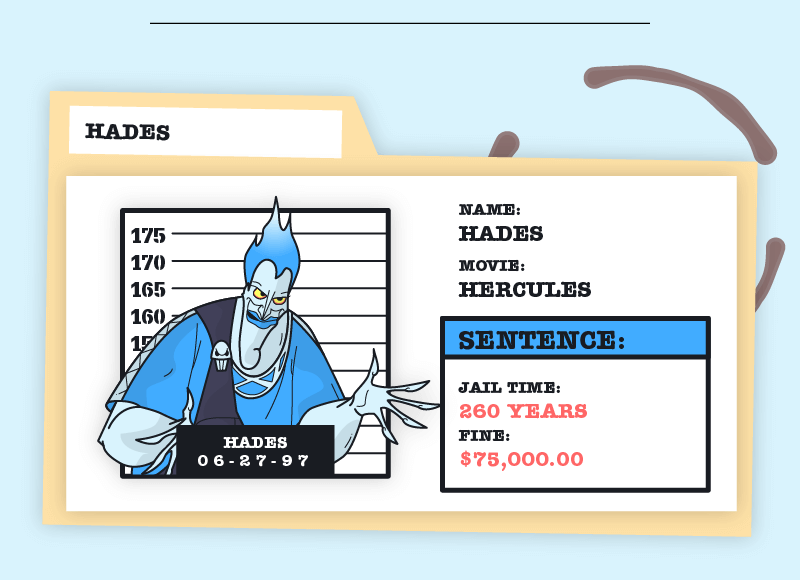 The Lord of the Dead needs to get rid of his nephew Hercules if he is to have power beyond his wildest dreams.

No one takes control of a throne without causing some mayhem along the way… with Hades, it’s a drawn-out list of malicious crimes that’ll put him in the slammer for an extensive amount of time. 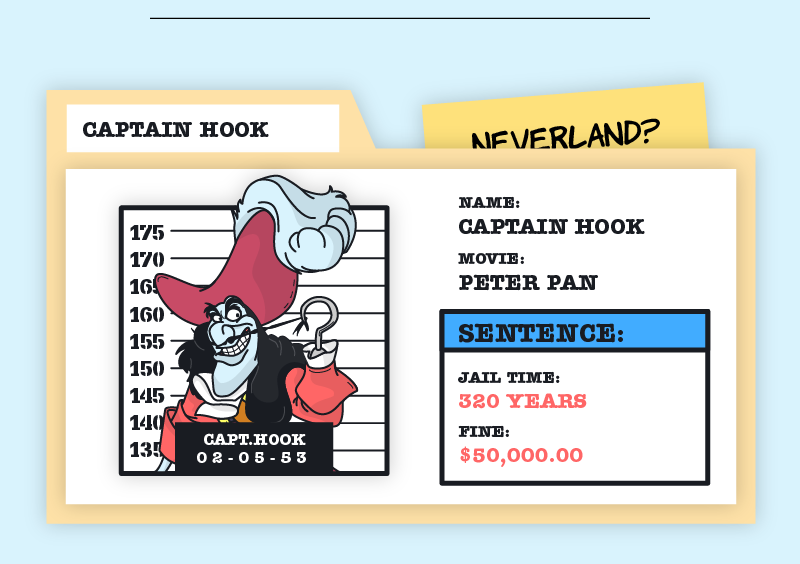 These baddies are bad but no one can match up to the downright dreadful power of Captain Hook. First things first, he’d been sentenced for being a pirate but he also commits attempted murder, murder and kidnapping.

Each conviction carries a life sentence and kidnapping has a maximum fine of $50,000. A hefty price to pay for revenge on the boy who never grows up!

Rewatch all your favorite Disney villains with the Decluttr Store. We have a huge range of Disney DVDs and Blu-rays at incredible prices plus FREE shipping.

Sentencing information sourced from findlaw.com. The prison sentences were calculated using sentencing guidelines for the State of Michigan. Please note, this information is purely for entertainment purposes and may not be 100% accurate or definitive.