We took 10 of the most infamous villains to see how long they’d spend in the slammer, if they were charged in the state of Georgia. 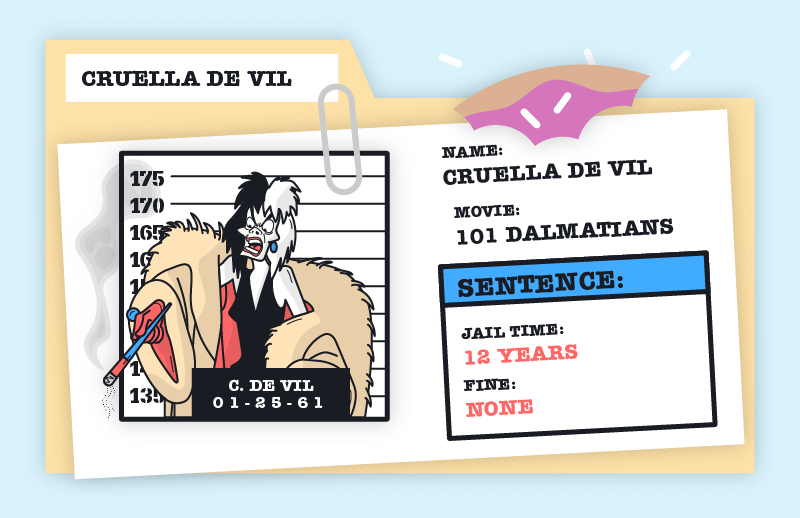 Miss De Vil gets off lightly compared to her evil counterparts. She’s found guilty of cruelty to animals as well as driving recklessly, which sees her getting a year for each behind bars.

The heftiest part of her sentence comes from her theft of the dogs – they’re valuable animals, making her crime a felony and landing her in the big house for an additional 10 years! 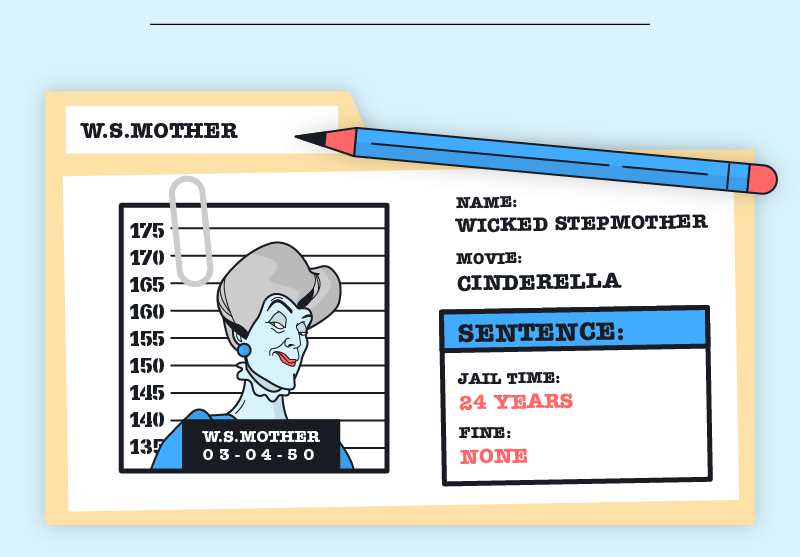 Wicked by name and wicked by nature, Cinderella’s stepmother is guilty of three crimes: child cruelty, false imprisonment and criminal damage to property. The state of Georgia would find the Stepmother guilty beyond reasonable doubt, seeing her crimes rise from misdemeanors to felonies.

As there’s no damage to life when she destroys the glass slipper, she shaves a few potential years off her 20+ year sentence. 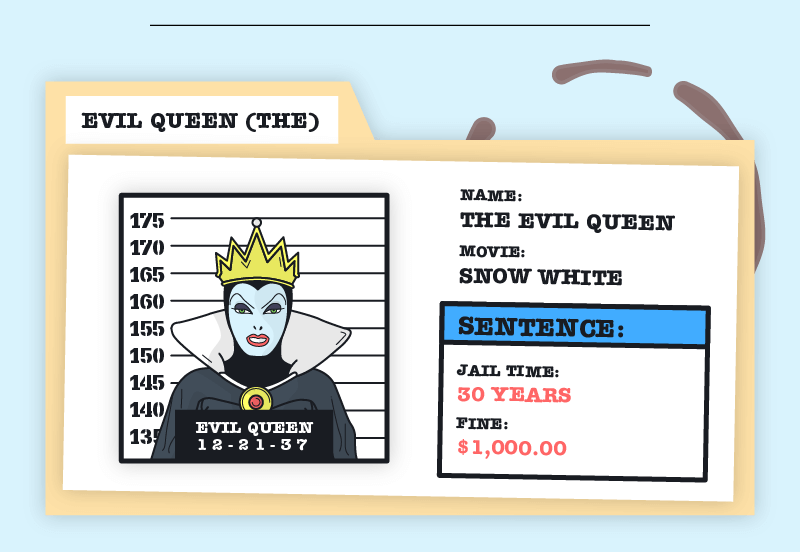 The self-obsessed stepmother to Snow White seeks revenge after she’s told Snow White is the fairest of them all.

She’s looking at a 30 year stretch, with the bulk of her sentence coming from an attempted murder charge as she tries to poison Snow White. She’s also guilty of false imprisonment and abusing her power as Queen. 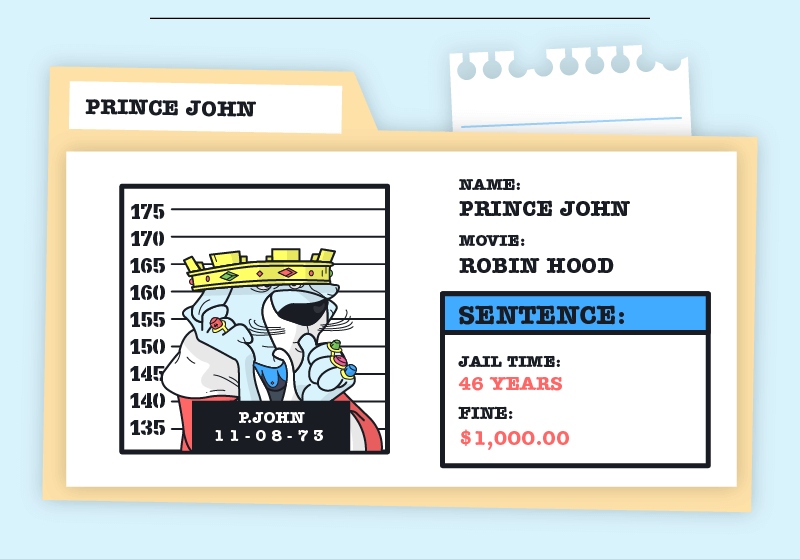 Prince John’s reign of terror makes him one of the baddest baddies on our list. He strives for wealth beyond his wildest dreams, leaving his subjects in poverty – abusing his position which he would be charged for with a year in prison along with a $1,000 fine.

He’d also be tried for aggravated assault and treason, resulting in a long sentence, if not the death penalty. 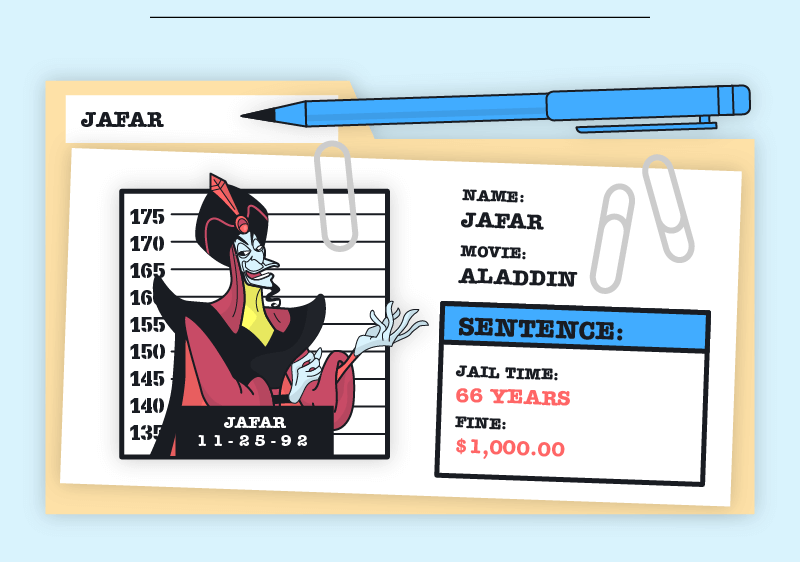 The Grand Vizier of the Sultan of Agrabah would probably spend the rest of his days behind bars, if he were convicted in Georgia.

His despicable crimes like attempted murder, kidnapping and a felony conviction of theft mean he’s looking at a stretch of more than 50 years in the slammer. It’s still a shorter sentence than being trapped inside of the lamp and becoming the new genie! 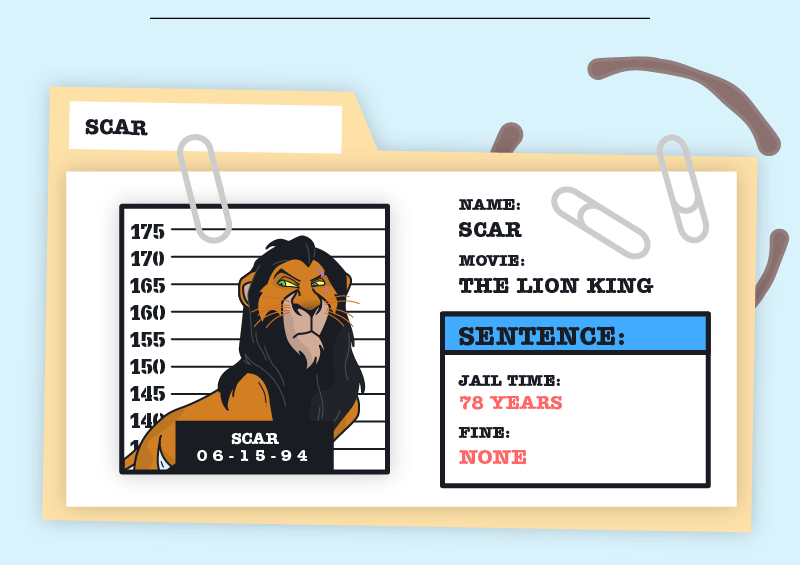 It might be a little tricky getting a lion into a Georgia courtroom, but after the devastation he caused 90s kids, we needed justice.

Each crime Scar commits in his quest to rule over the Pride Lands carries a long prison sentence. After successfully killing his brother Mufasa, he attempts to kill his nephew Simba. Scar is guilty of child endangerment which has a felony charge of up to 20 years. 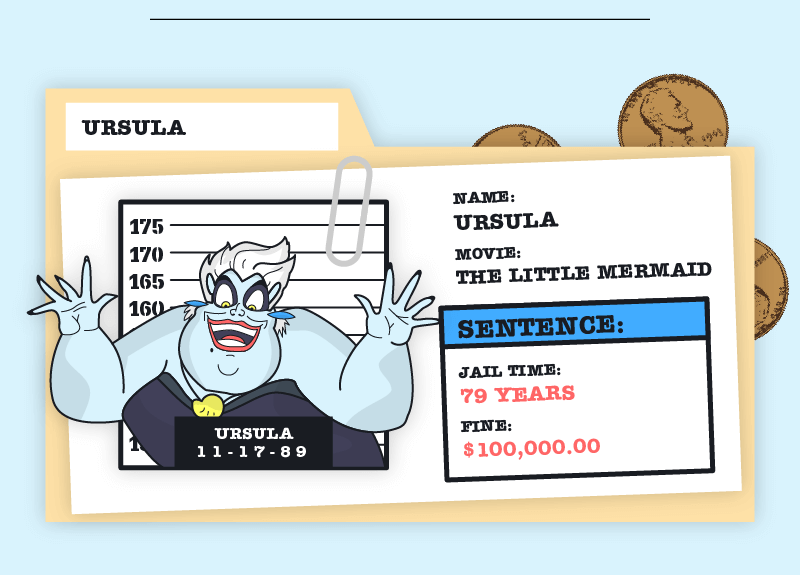 Villains don’t get much more manipulative than Ursula, who strikes up a deal with Ariel to give up her voice in exchange for a pair of legs.

Her deception and dangerous behavior sees Ursula tallying up a sentence of almost 80 years. We, the court, find her guilty of treason, fraud and attempted murder as well as murder and false imprisonment. 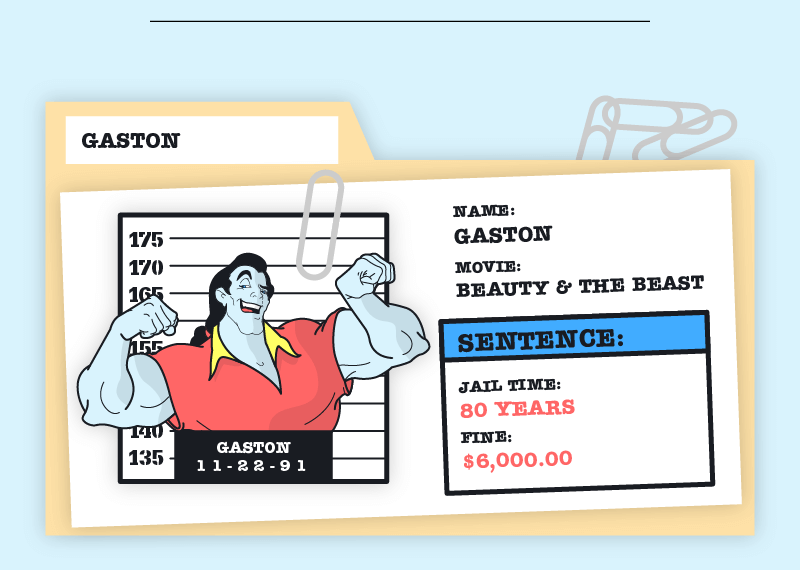 Ghastly Gaston has a long, serious rap sheet. In his attempts to win over the beautiful Belle, who doesn’t fall for his falsified charming exterior, he resorts to bribery, which carries a sentence of up to 20 years in prison, extortion and false imprisonment.

He doesn’t get the girl; instead, he’d receive a hefty fine and a prison sentence spanning the remainder of his life. 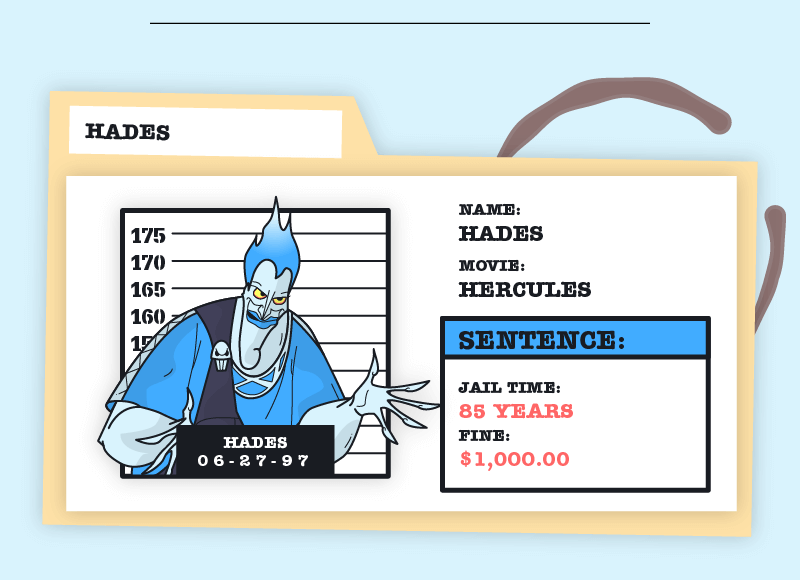 Hades and his big plans to rule over Mount Olympus et al land him in some real trouble with the law. He resorts to treason, child endangerment and murder on his way to the top.

If he could be tried before a judge in Georgia, we’d expect one of the biggest sentences handed out to our villains. Hades is bad – but not quite the worst. 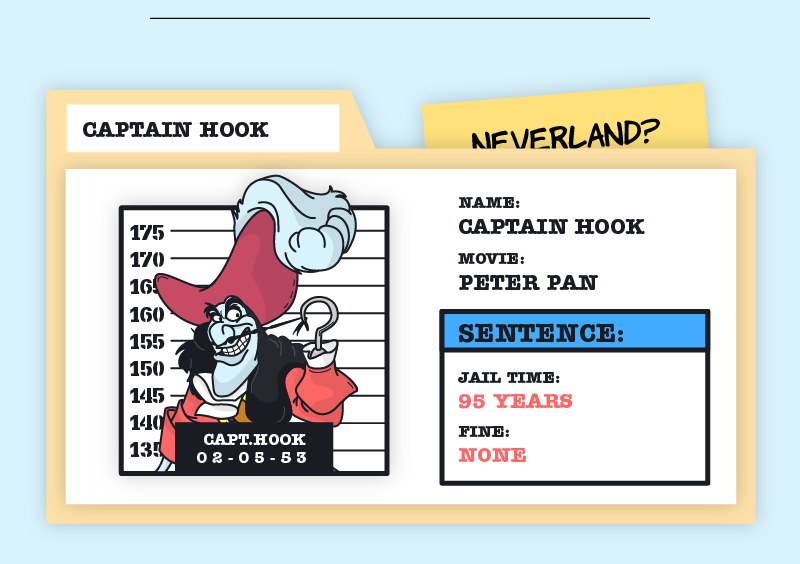 Villainy finds its worst form in Captain Hook! His torture of Peter Pan, and the little detail that he’s an actual pirate, means it’ll be a long, long time before he can breathe in the sea air as a free man again.

Each of his crimes lead to heavy punishments – he’s guilty of piracy, attempted murder, murder and kidnapping. He’d be locked up for almost 100 years!

Relive all the ghastly crimes of your favorite Disney villains with the Decluttr Store! We have a massive range of Disney DVDs and Blu-rays at incredible prices plus FREE shipping!

Sentencing information sourced from findlaw.com. The prison sentences were calculated using sentencing guidelines for the State of Georgia. Please note, this information is purely for entertainment purposes and may not be 100% accurate or definitive.