We took 10 of the most infamous villains to see how long they’d spend in the slammer, if they were charged in the state of Florida. 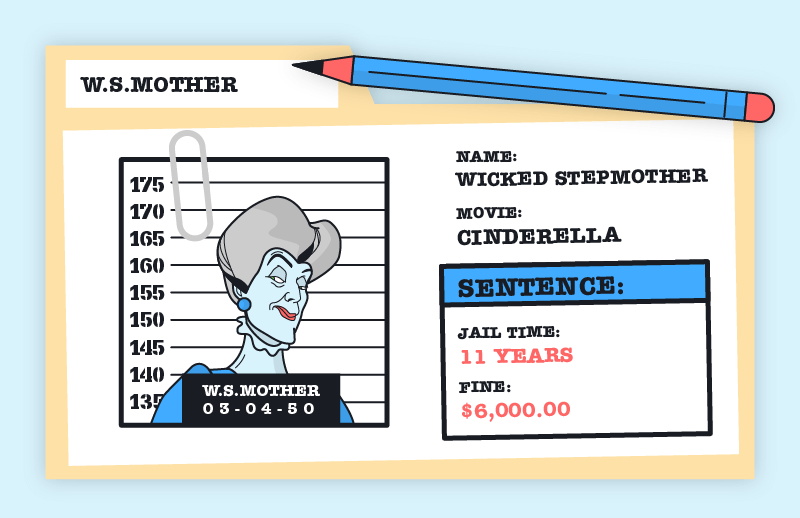 She may be wicked, but she is an angel compared to the rest of our list!

Lady Tremaine has three marks against her name, being found guilty of child cruelty, false imprisonment and destruction of property as she is the one who destroys the glass slipper in an attempt to destroy Cinderella’s chances of marrying Prince Charming. The joke’s on Lady Tremaine as she’s facing more than a decade behind bars. 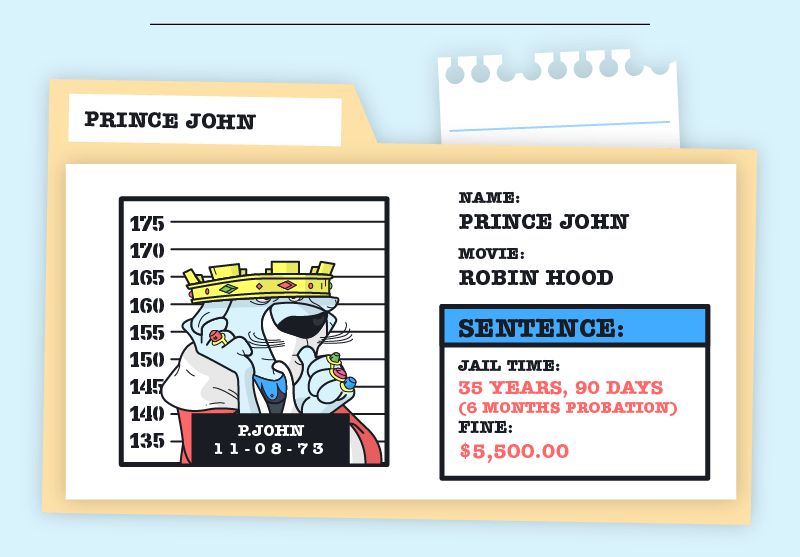 The tyrannical leader in Robin Hood (who slips onto the throne whilst his brother is away, the sneak) receives the biggest chunk of his sentence from the charge of treason.

Aside from that, John is guilty of official misconduct based on his huge tax inflation to line his own pockets. That carries a felony charge which puts him away for five years. The remainder of his time in the big house comes from a 60 day penalty for assault. 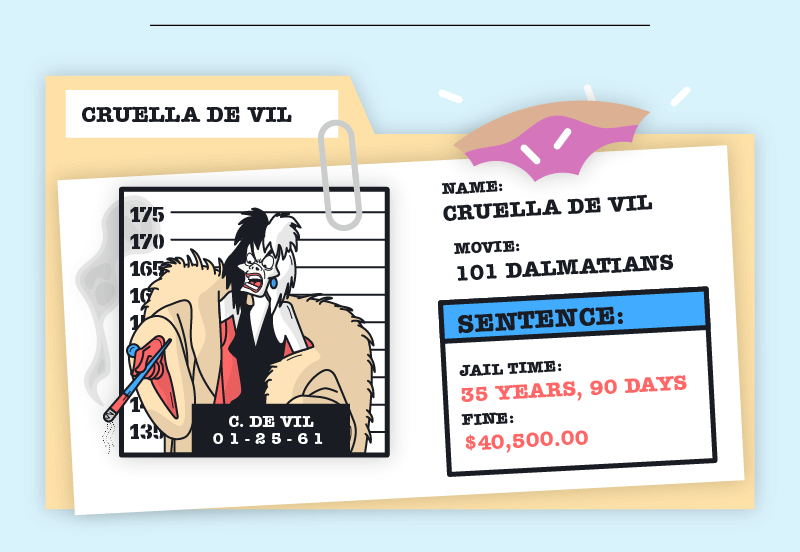 The corrupt Cruella has her sights set on making coats out of the poor dalmatian puppies, so the state of Florida finds her guilty of not only cruelty to animals, but theft and reckless driving.

She’s got a 30 year stretch ahead of her for the theft of the dogs, due to their high value. It also carries a huge fine, making Cruella ever-so-slightly worse than Prince John. 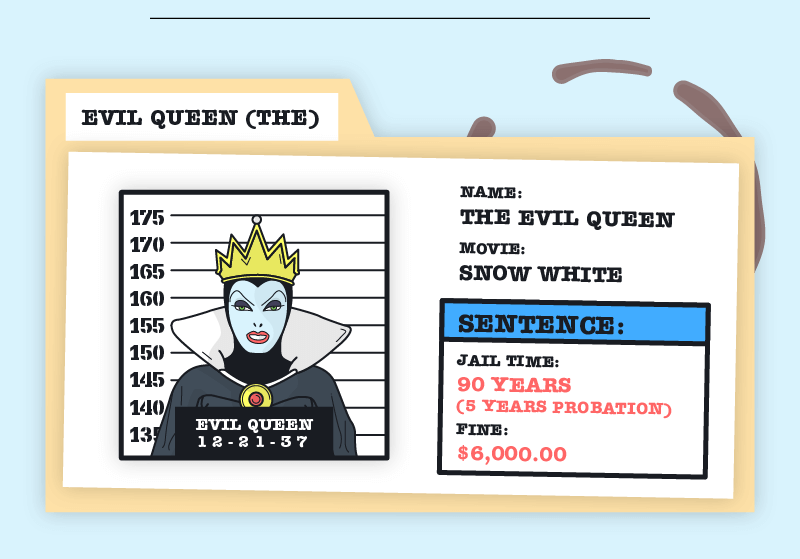 Living up to her name, the Evil Queen would be locked up until the end of her days, were she to be tried in Florida.

The vast majority of her extended sentence is down to her attempted murder charge; Queen Grimhilde took matters into her own hands to bump off Snow White by offering her a poisoned apple. She adds another 10 years on to her sentence for charges of false imprisonment and misconduct. 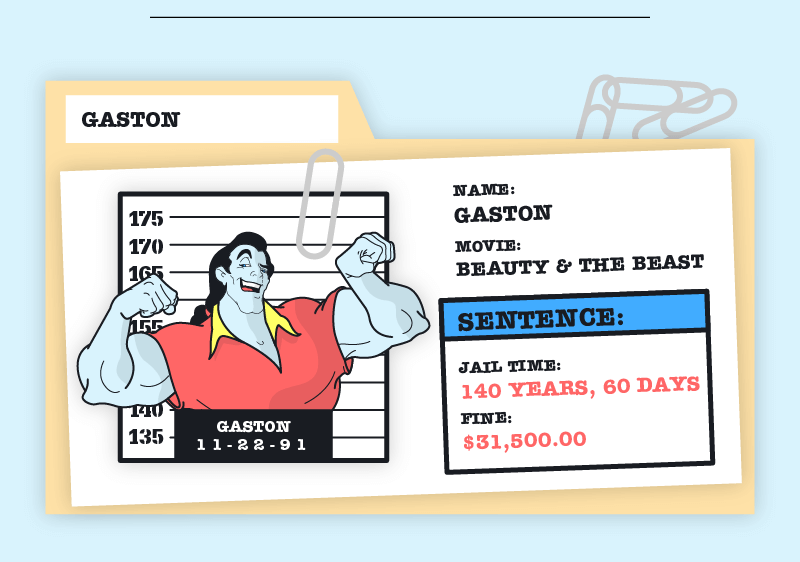 The ever-charming Gaston isn’t quite what he seems. He decides Belle is the one for him, but she isn’t so keen, so he commits a heap of crimes to get the girl. Yep, we think that’s weird too.

Gaston tries to kill the Beast, landing him a life sentence then he gets another 30 years for breaking and entering into Belle’s house. It’s a bit of a stretch for an unrequited love! 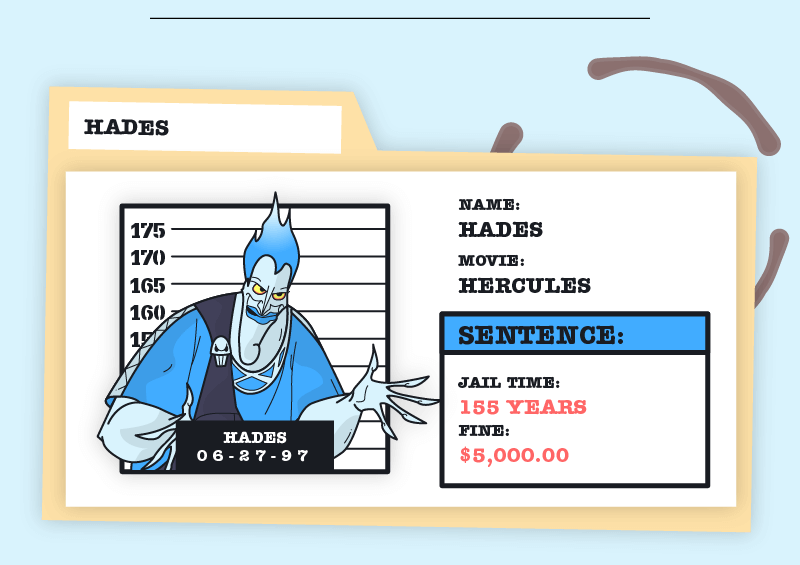 It’s difficult being the brother of Zeus, we get it, but that doesn’t excuse going on a big crime spree.

In his quest for power, Hades commits murder, kidnap and child endangerment meaning he’ll be locked up for a long, long time. With more than 150 years behind bars, Hades sits in the middle of our sentences – which tells you how bad our villains really are! 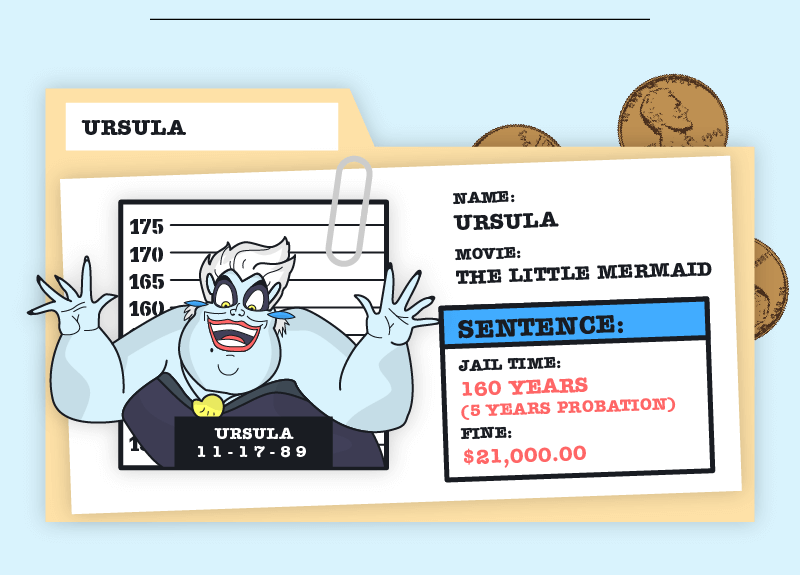 She’s the worst lady on our list by a significant amount, with a rap sheet that includes fraud, attempted murder and false imprisonment.

Ursula is incredibly manipulative and there isn’t much she won’t do for her own personal gain. Being so morally corrupt isn’t a good enough excuse in the state of Florida, so she’ll be put away for 160 years! 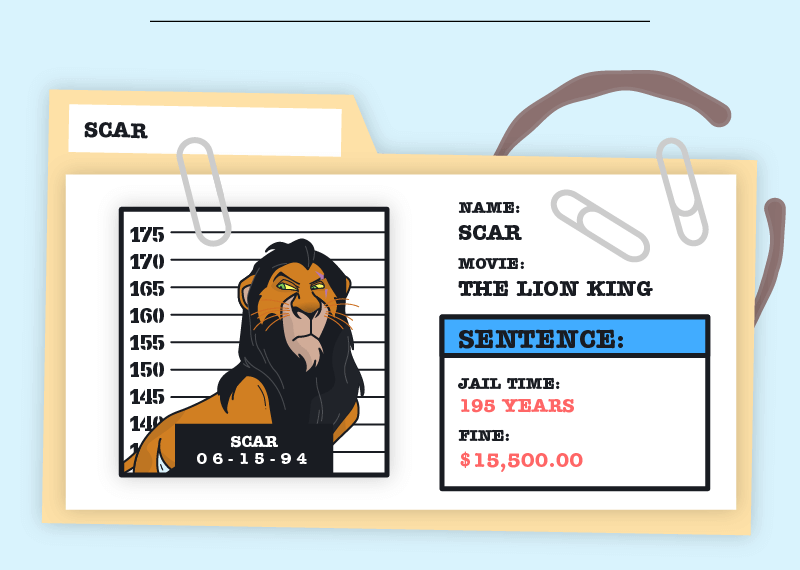 Florida is finally dishing out the justice when it comes to Mufasa’s death. The King of the Pride Lands was cruelly killed by his brother Scar, who’ll get a life sentence for the cold-blooded murder.

It doesn’t stop there either; Scar is guilty of treason, attempted murder, assault and child endangerment after he tries to get rid of Simba too, in order to rule. 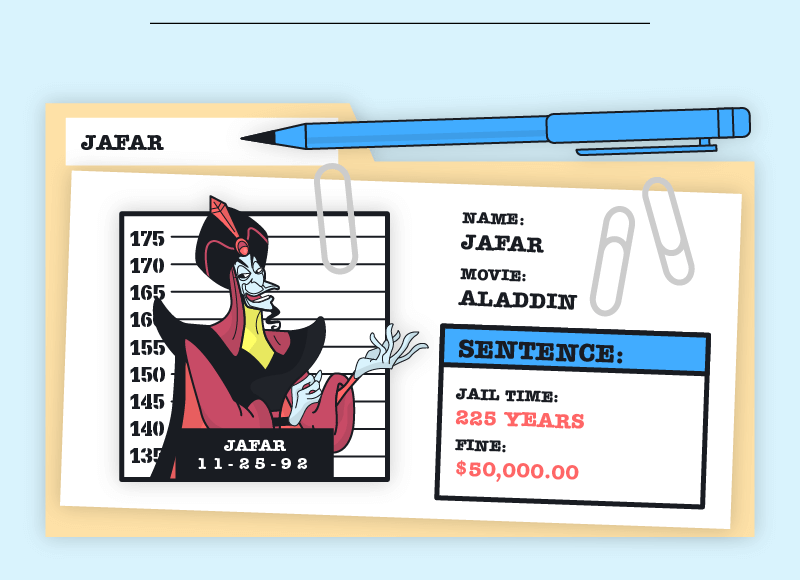 Aladdin’s nemesis Jafar may be tricked into becoming the new genie, but by our calculations, he’ll end up in the slammer for more than 200 years. He’ll do time for treason, attempted murder and a long stretch for theft.

The Grand Vizier had dreams of becoming Sultan but he’ll be an inmate for the rest of his life. 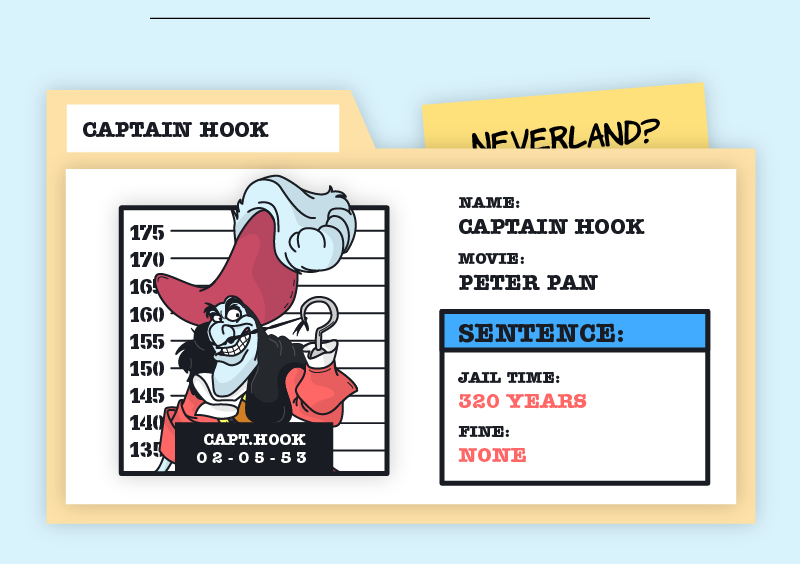 The rest may be bad but they pale in comparison to the malicious Captain Hook. He’s guilty of four felonies which all carry the most serious of punishments. His trail of revenge and indulging in piracy means he’ll be in the big house for more than 300 years!

Want to revisit the life and crimes of your favorite Disney villains? Check out the huge range of Disney DVDs and Blu-rays on the Decluttr Store, all at incredible prices and with FREE shipping too!

Sentencing information sourced from findlaw.com. The prison sentences were calculated using sentencing guidelines for the State of Florida. Please note, this information is purely for entertainment purposes and may not be 100% accurate or definitive.