We took 10 of the most infamous villains to see how long they’d spend in the slammer, if they were charged in the state of California. 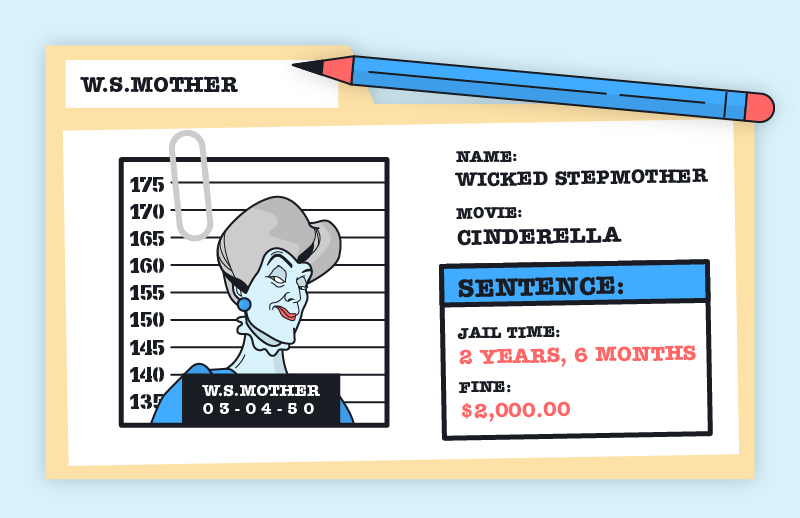 Wicked she truly is, but she’ll pay a pretty small price for her crimes. In the grand scheme of things, she’s not too much of a threat – but she is a terrible stepmother.

She’s guilty of child cruelty, false imprisonment of her stepdaughter and a ‘wobbler’ – vandalizing property. Her wobbler charge is a felony rather than a misdemeanor due to the cost of the slipper. 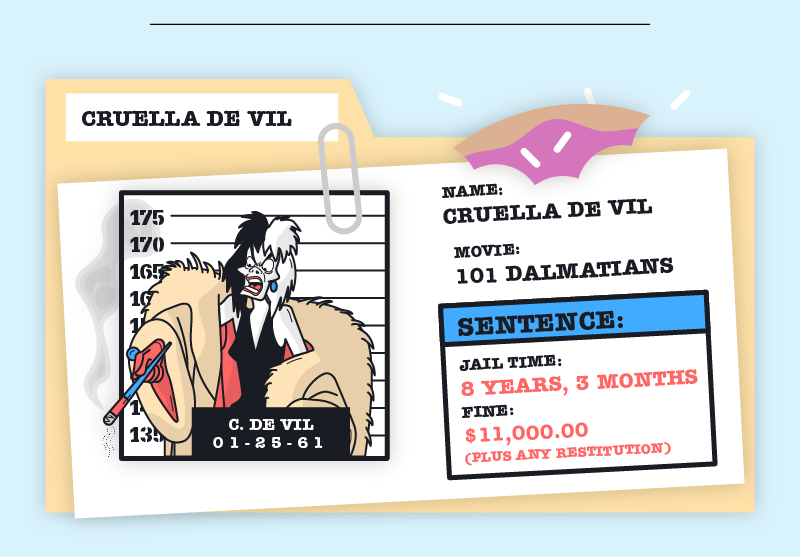 It’s not a coincidence that her name is more or less Cruel Devil. She’s rotten to the core but her crimes aren’t as big time, so she gets off lightly.

She’s guilty of grand theft in stealing the dalmatians which serves her up five years in the can. She’ll go down for cruelty to animals and dangerous driving which carry prison sentences and fines. 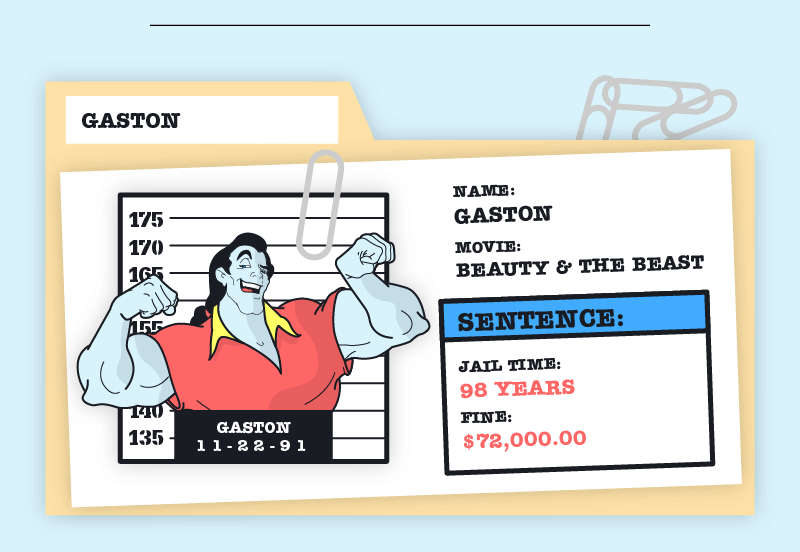 If someone isn’t interested in you romantically, you should move on – you shouldn’t try to start a riot and kill her new love interest.

Gaston can’t stand that he isn’t irresistible to Belle, so he tries to murder the Beast, breaks into Belle’s home and commits bribery. It’s always the handsome ones! 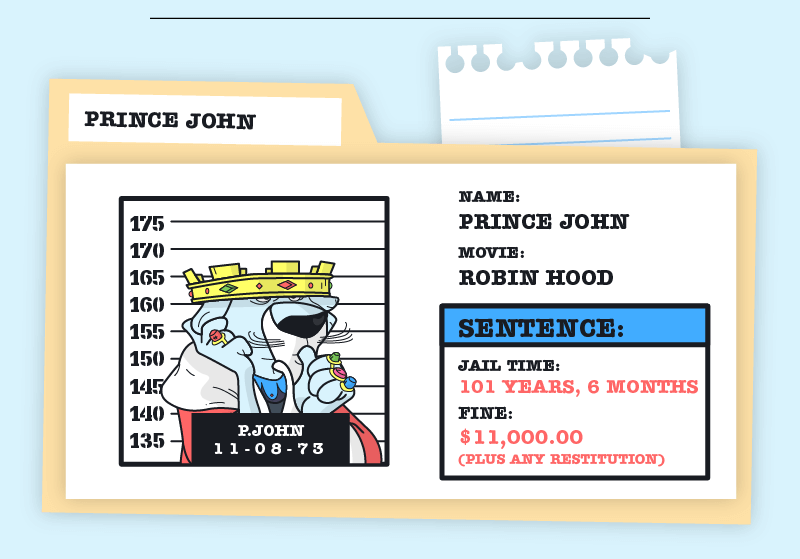 You know when you’re a kid and your parents go out and you can do whatever you want? So, you watch a bunch of TV and eat candy?

Prince John sort of did that in his brother’s absence except he made everyone poorer than ever. His overbearing reign will mean he gets more than 100 years in the big house, before we even consider the fines he’ll have to pay. 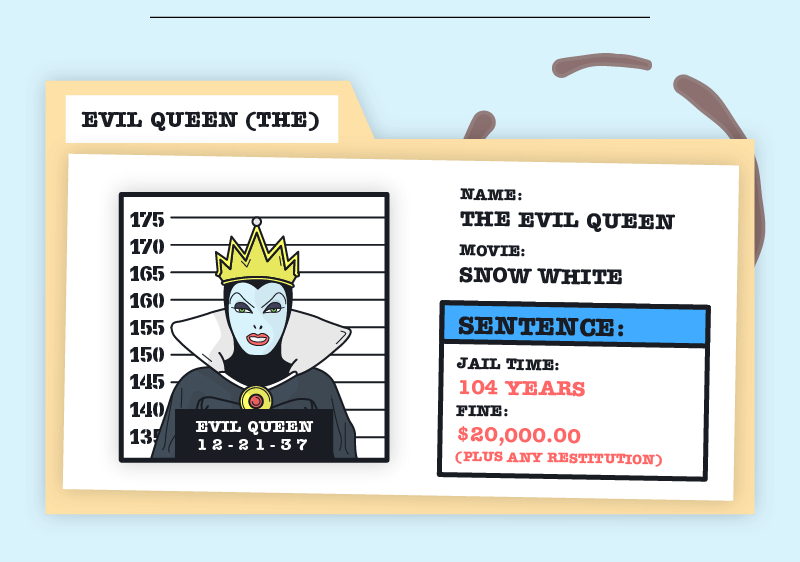 Poor Snow White is almost killed, all because she’s prettier than her stepmother. Queen Grimhilde disguises herself to slip Snow White the poisoned apple so she’s guilty of attempted murder.

More than that, she’s guilty of a false imprisonment felony as well as corruption. The fairest of them all is her sentencing! 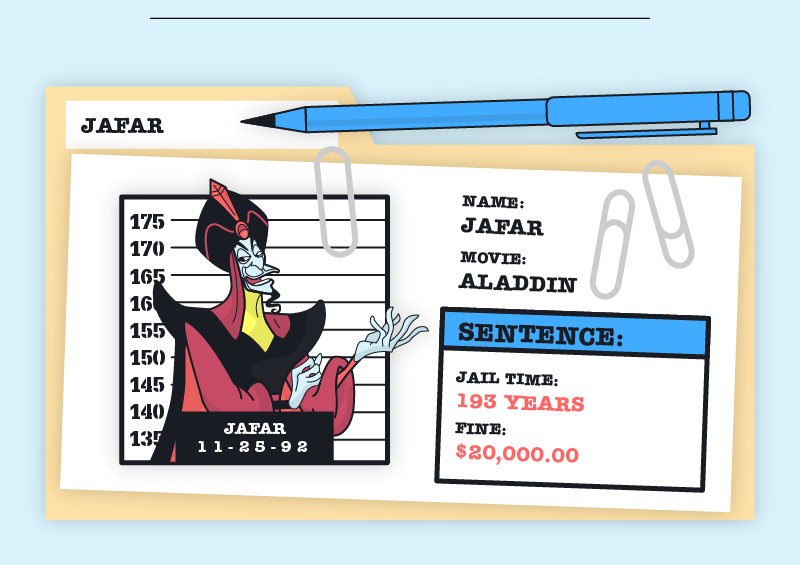 Jafar’s resumé is quite impressive. Not only is he the Grand Vizier of Agrabah, but he’s also an evil sorcerer. For his next career move, he hopes to become the Sultan but in order to do that, he had to commit some unspeakable crimes.

On his rap sheet is; treason, attempted murder, kidnapping, corruption and theft. After all that, he’ll be in a cell rather than the kingdom! 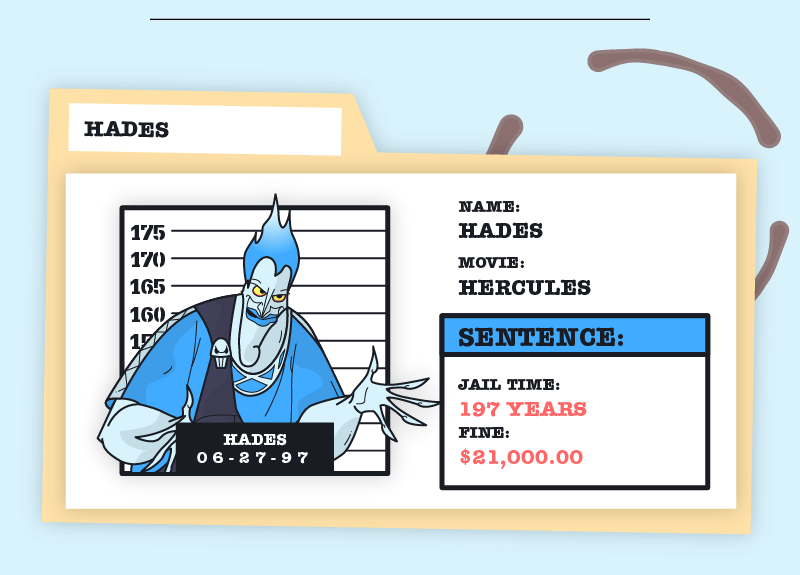 As a god, Hades has an abundance of power beyond any villain’s wildest dreams. That’s not enough for him though – he wants the control his brother Zeus has, and wouldn’t be above getting rid of his nephew to have it.

The lengths Hades will go to, you guessed it, adds up to a long sentence of almost 200 years. 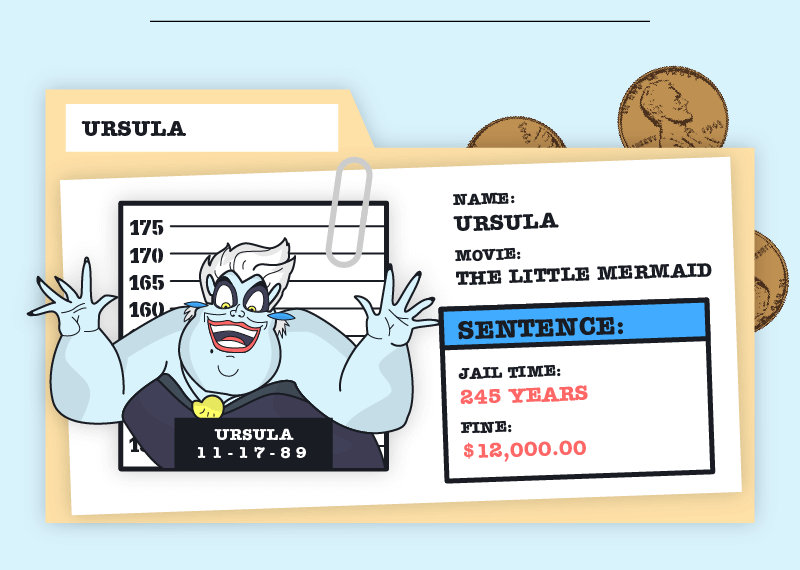 She’s as cunning as they come and potentially even more morally corrupt than the rest. Ursula will stop at nothing to get what she wants, and dupes Ariel into a deal because she’s vulnerable.

The deal sees Ariel swapping her voice for a pair of legs, but Ursula uses Ariel’s voice for fraudulent activity. That’s the least of her worries though, as she racks up a few felonies and a heap of years behind bars! 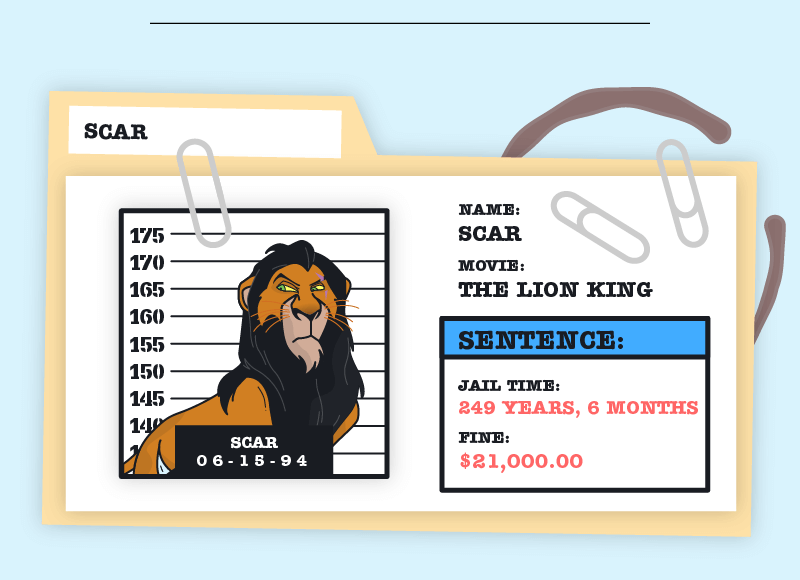 You have to be really twisted to whack your brother and convince your nephew it was his fault in order to rule over a kingdom.

What happened to blood being thicker than water? Scar misses a 250 year sentence by only a whisker due to his heavy crimes of attempted murder, murder and treason. 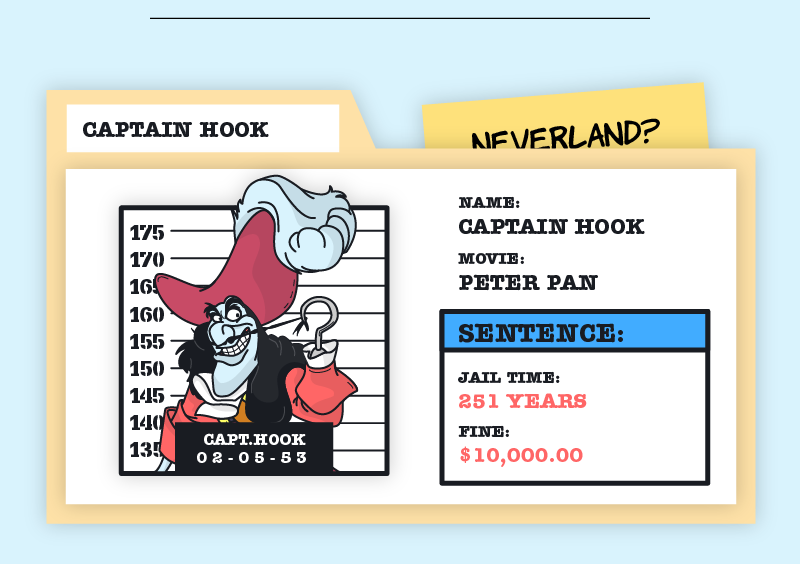 The contemptible Captain Hook is the vilest villain we could find! He’s focused on gaining revenge over Peter Pan after losing his hand in their last duel. It’s clear Hook wants blood for blood, as he’s not above killing one of his own men.

Add that to charges of piracy, attempted murder and kidnapping and Hook is looking at spending the rest of his life in the big house.

You can revisit all the misdeeds of your favorite Disney villains with the Decluttr Store! We have a huge range of Disney DVDs and Blu-rays at incredible prices plus FREE shipping. Treat yourself to some Disney classics today!

Sentencing information sourced from findlaw.com. The prison sentences were calculated using sentencing guidelines for the State of California. Please note, this information is purely for entertainment purposes and may not be 100% accurate or definitive.