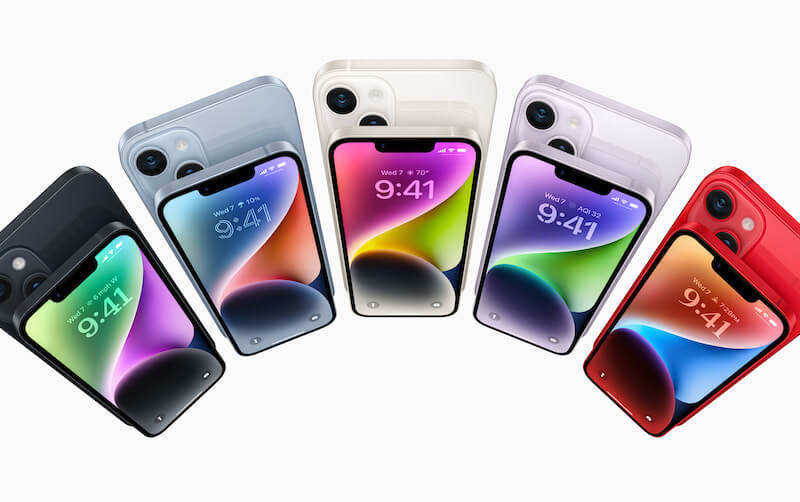 iPhone 14 vs iPhone 13: The Biggest Differences

Looking to upgrade your iPhone 13 but unsure if the iPhone 14 is worth the hassle?

Since Apple’s announcement of the iPhone 14, it’s become a bit confusing to figure out what exactly has been improved and upgraded in this year’s iPhone model.

We’re comparing the main difference between the two iPhone models, so you can decide if that upgrade to the iPhone 14 is worth it!

Differences in a nutshell

The iPhone 14 series consists of the iPhone 14, 14 Plus, 14 Pro and 14 Pro Max. If you’re wondering where the iPhone 14 Mini is, we’re sad to say Apple has decided to skip the model this year.

As the Plus model is new, we can’t compare its price to any previous iPhone 13 model, but it seems to fall in line with the general prices of other devices.

Apple has also decided to stick with the diagonal dual camera system layout along with the glass-backed flat aluminium side frame.

Although the display size remains the same, Apple has made the iPhone 14 slightly thicker than the previous 13 models. This means that anyone looking to upgrade will have to spend extra cash on a new iPhone case too.

Apple has made some changes to the iPhone 14 Pro models, one of which is the addition of the Dynamic Island. This change was to tackle the notorious notch at the top of the iPhone display. While the notch is still very much there, it’s now a smaller pill-shaped notch that works with your display in widget style.

If you’re hoping for some battery improvements since last year’s iPhone 13, you may be disappointed. The iPhone 14 has only managed to increase its video playback by one hour. While one hour isn’t a great deal more, it’s an extra hour nonetheless!

While the cameras might look the same, there are a few differences. The iPhone 14 has a larger sensor size and a faster f/1.5 aperture. All of the cameras also benefit from a new processing model called the Photonic Engine, makeing low-light images even better.

The front-facing camera now has a TrueDepth camera with an F/1.9 aperture and auto focus – something that was previously only available on the Pro models.

One of the three back cameras on the iPhone 14 Pro models has been upgraded too. The old 12MP main wide camera is now 48MP, so you’ll get much better photos.

If you’re looking for some video improvements, you’ll be happy to note Apple has introduced Action Mode and 4K video on all the iPhone 14 range!

For the first time in iPhone history, not all of the new iPhone models feature a new chipset.

All of the iPhone 14 models come equipped with Crash Detection, a feature that Apple Watch users will be familiar with. This makes it possible for your iPhone to detect if you have been in a severe crash and will automatically call the emergency services for you.

The new iPhone has Emergency SOS via Satellite for all US and Canada, a new feature that will let you connect to a satellite to contact emergency services if you don’t have WiFi or a cellular signal. While this is a pretty groundbreaking feature to add, users will eventually have to pay for the feature after two years.

Now available on iPhone 14 Pro and iPhone 14 Pro Max devices only is the new (for Apple, anyway) Always On display! This feature enables your display to stay on at all times, making it possible to see notifications, the time, and other features on your display without waking your phone up. Even when your device is locked, your screen will still be visible!

Apple have chosen to remove the Nano SIM tray, in turn removing all physical SIM cards from their iPhone 14 range. Those wanting to purchase any of the iPhone 14 models will have to use e-SIM technology, meaning you won’t be able to insert your physical SIM.

Want to upgrade to the new iPhone 14 series? Trade in your old iPhone and get instant cash to put towards your upgrade!

View all post by Nicole Newton.
← Alternatives to the iPhone 14
iPhone 14 model comparison: all the differences →