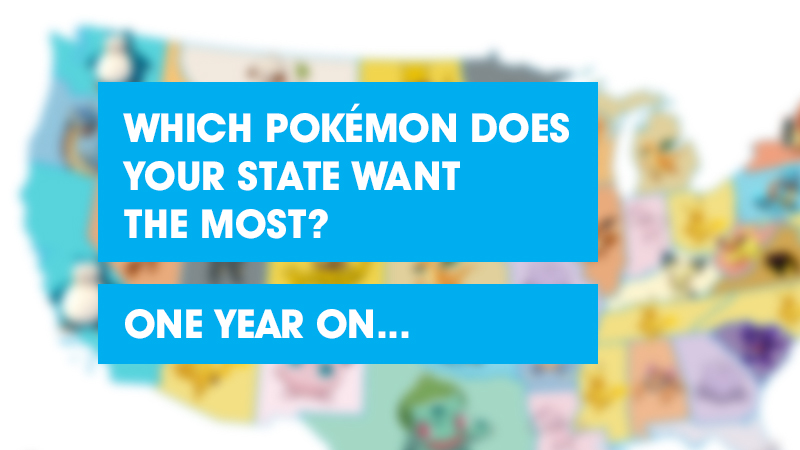 Which Pokémon does your state want the most? One year on…

This time last year, the US was in the grip of Pokémon Go fever. Cities across the nation were swarmed by people desperately hunting for their favorite monsters, with Central Park in New York City becoming a mecca for Pokémon Go players.

At the height of the Pokémon Go craze, our iPhone trade in levels soared, so we published a graphic showing which state was searching for which Pokémon.

To celebrate the game’s anniversary, we decided to revisit our data and find out which Pokémon each state is searching for in 2017 – has the introduction of Gen 2 Pokémon changed players’ priorities, or are they still hunting for the same monsters?

To do this, we paired up phrases like ‘where is…’ and ‘how to find…’ with all the Pokémon in the game and then measured search volume in each state.

Here are the Pokémon each state has been searching for this year.

Like last year, the most wanted Pokémon in America is Pikachu. This is no surprise given Pikachu is the official Pokémon mascot, although it also suggests that everyone’s favorite little electric mouse is pretty hard to find!

In second place is Eevee, who is at the top of four states’ most wanted lists. Three of those states (Alaska, Illinois and Nevada) were also looking for Eevee last year, with Hawaii joining the list in 2017 after finding Pikachu last year.

Here’s the full list of Pokémon each state is searching for this year (with 2016’s data included for comparison!).

Looking for a fast and easy way to sell your Cell Phone or trade in your apple watch? Give Decluttr a try! When you sell electronics for cash with us, simply get an instant price, ship your phone for FREE and we’ll pay you the same day it arrives.

View all post by Chris Smith.
← Who is the most popular video game character in your state?
The Top 10 Best-Selling Xbox One Games of All Time →