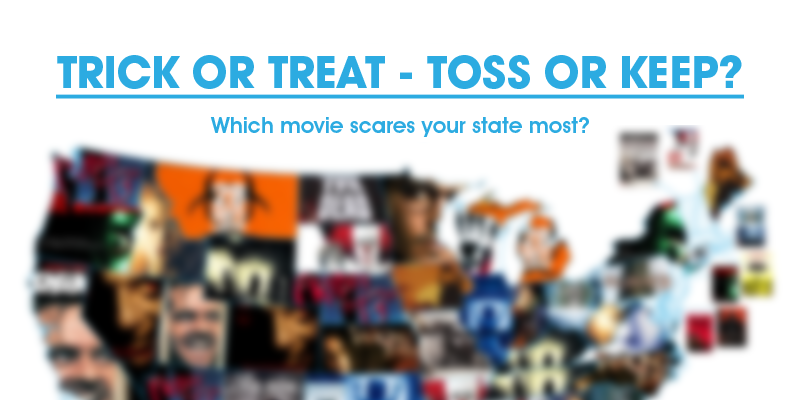 Trick or treat: which horror movie is your state scared of most?

Halloween is approaching faster than Freddy Krueger on a dream motorbike.

Although millions of us dress up and go to a party or even trick or treating (hey, you’re never too old!), a lot of us prefer to draw the curtains, turn the lights off and watch scary movies.

But which movie is your state scared of most? We used our data to find out which horror movie the residents of each state have been selling most, which obviously means that they’re just too scared to cling onto it… right?

Here’s what we found…

According to our data, there are six horror films Americans are scared of most…

Ghosts, creepy little kids and a serial killer in a hockey mask – they’re enough to make anyone want to sleep with a nightlight.

And we guess that whole creepy clown thing is really getting to folks in Arkansas, New Hampshire and South Dakota too!

Honorable mentions also go out to A Nightmare on Elm Street (2 – Jason beat you Freddy, sorry), The Texas Chainsaw Massacre (2), The Evil Dead (2), Sinister (2), Hannibal (2), The Others (2) and, most surprisingly, Secret Window.

The most surprising results of all, though, come from Delaware and Pennsylvania, where Blade and Blade 2 came out on top respectively.  If you’re from either of those states, let us know if you find anything scarier in the comments!

If you’re terrified of your horror movie collection (or just need some fast extra cash!), sell your DVDs & Blu-Rays with Decluttr!

“That’s great, but what about if I want to sell my iPhone or sell my mobiles, Decluttr?!”

We’ve got you covered there too, hypothetical reader! You can sell iPhone 6, iPhone 7 or pretty much any other iPhone with us too. So, if you’ve ever wondered “where I can sell my iPhones that I don’t use anymore?”, check us out. It’s fast, easy and FREE!

Here is the full list of movies by state…

View all post by Chris Smith.
← 6 movies with terrible reviews that still made a ton of money at the box office
What is America’s Most Popular Christmas song? →