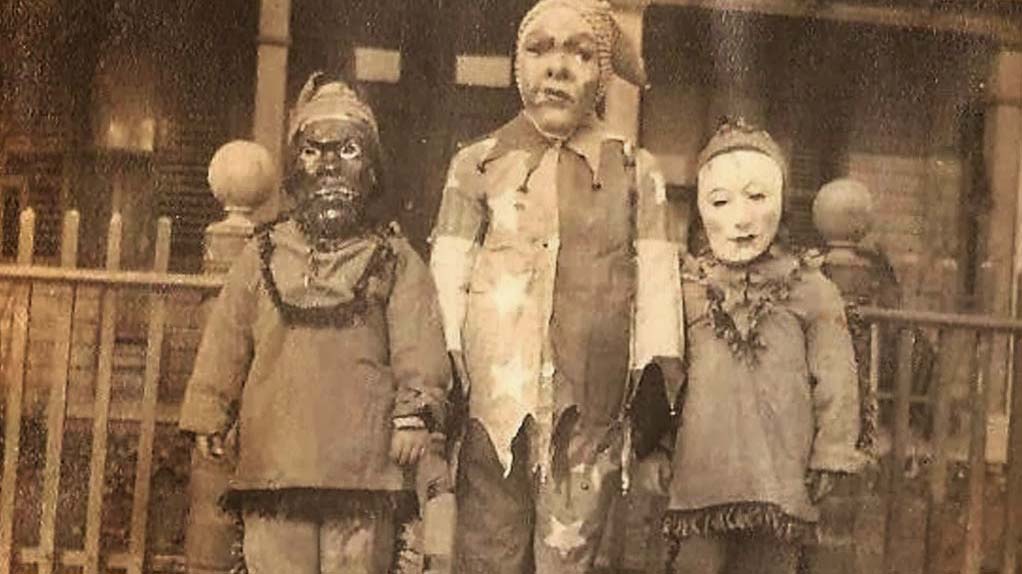 13 of the Most Terrifying Halloween Costumes You’ll Ever See

Believe it or not, for some people, a Halloween costume is more than just an excuse to dress up as a sexy version of a nurse or a lawyer or a doctor or whatever sexy version of whatever field you were unable to complete a degree in. For some folks, Halloween is a chance to tap into the darkest part of their imagination and come up with an outfit so chilling, it’ll haunt the memories of every poor sap who lays eyes on them. We scrounged the dark corners of the web to find some of the most terrifying costumes you’ll ever see.

These days, you can’t walk five feet on Halloween night without bumping into someone with a sexy animal costume. But there’s nothing sexy about these what-we-think-are-greyhounds. I’ve spent about thirty minutes scrutinizing this costume and I still can’t tell how these people see out of those masks so I’m just going to go ahead and say that they aren’t masks and we’re seeing a photograph of some sort of dog-human hybrid beast. If I saw them on the street, the only greyhound I’d be interested in is a one-way bus out of town.

Children are pretty terrifying as-is. They take all your money and time, they constantly leak, and they pretty much guarantee that you’ll never have a full night’s sleep again. But if you’re one of the few that is still getting restful ZZZs, then maybe these featureless monster children will haunt your dreams and keep you awake in the wee hours of the night.

This Demonic Where the Wild Things Are Group

These costumes are almost cute, but the high contrast, simple silhouettes, and sharp, pointy teeth make them something out of a Yo Gabba Gabba induced fever dream. Oh sure, those Muppets look cute from afar, but get up close and they’ll tear you to shreds.

Old timey nightgowns are pretty creepy to start with. Add a baby bottle and another one of these dead-eyed vintage masks and you’ve got a nightmarish vision that’s more appropriate for a Texas Chainsaw Massacre prequel than Halloween night.

Donald Duck isn’t necessarily the happiest guy: short-tempered, quick-to-anger, and, according to this costume, hungry for blood. We can’t be certain that the red stains all over this bootleg paper mask are from drinking Mickey’s lifeforce (it could be fruit punch after all) but this isn’t the sort of thing you want to debate when you see this guy standing in a darkened corner. Just slowly back away because you’ve entered the Unhappiest Place on Earth.

Remember back in the day when clowns all wore those big cone hats? Me neither, so when I look at this picture, all I can think of is a birthday party at a KKK rally. There’s a lot of creepy stuff going on here: adults dressed like Little Miss Muffet twins, wallpaper straight out of “Decorating Your Creepy House for Dummies,” and a couple ghostly portraits of the house’s former inhabitants. This whole thing looks like it’s from a Halloween party at the Overlook Hotel and we will happily decline that invitation.

Oh come on! Bert and Ernie are supposed to be cute, lovable oafs who bicker about everything and teach kids about letters. What they aren’t supposed to be are wide-eyed, quasi-humanoid monsters whose dead pupils stare directly into your soul. With their wide-slit mouths, these beasts will have you canceling your donation to PBS.

Looking like a mix between Jigsaw and Kris Jenner, this walking, talking marionette is pure nightmare fuel. Chilling dead eyes as we’ve seen in so many vintage costumes? Check. Little piggy nose? Check. Weird lumpy face? Check. Puppets are already scary enough. The only thing more frightening would be meeting the thing that pulls its strings.

These days, there’s no animal trendier than the owl. You can find images of them everywhere, from the vintage painting at your friend’s house to the bejeweled owl necklace on your girlfriend’s neck. Now, you can find them in your nightmares. With razor sharp talons bursting forth from a mud-stained suit, this monster looks like it could tear you to shreds and consume you in the blink of an eye. Even in the daylight, this picture is creeping us way out.

These Balls of Terror

This… What is this!?

Is this a Halloween costume? That kid doesn’t look like he’s in on this at all. Who took this picture? What are those people supposed to be? Is this part of an elaborate kidnapping scheme? THESE PEOPLE ARE LITERALLY JUST WEARING MASKS AND CLUTCHING A TERRIFIED CHILD. Somebody call the cops, send out an Amber Alert, and let’s all hope for the best here.

These days, everyone loves unicorns. They’ve become to the go-to spirit animal for everyone who thinks they’re a unique and magical creature, out to make every day just that much more interesting. But let’s not forget that unicorns are monsters. They are mythical beasts who would impale you before they’d ever let you ride on their backs. And while modern depictions make them out to be beautiful, majestic animals, this one, with its stunted snout and hollow eyes is less of a mythical horse and more of a nightmare. Oh, and just to kick things up a notch, this one is stealing a baby. Maybe it’s time we started fetishizing Pegasuses instead.

This Child Wearing a Bunch of Swastikas

This is a child wearing a bunch of swastikas and we really don’t think there’s much more to say on that topic.

You know what’s more terrifying than these costumes? Clutter, that’s what. Let us help make your life less scary by paying you cash when you trade in games, sell CDs online, sell textbooks and sell DVDs. Download our free app now or click below.

You can also sell your Tech, including sell iPhone, Apple Watch trade in or check out our sell my phone page.

View all post by Decluttr.
← Which Horror Movie Villain Are You? [QUIZ]
The Illustrated Guide To Movie Star Anagrams →