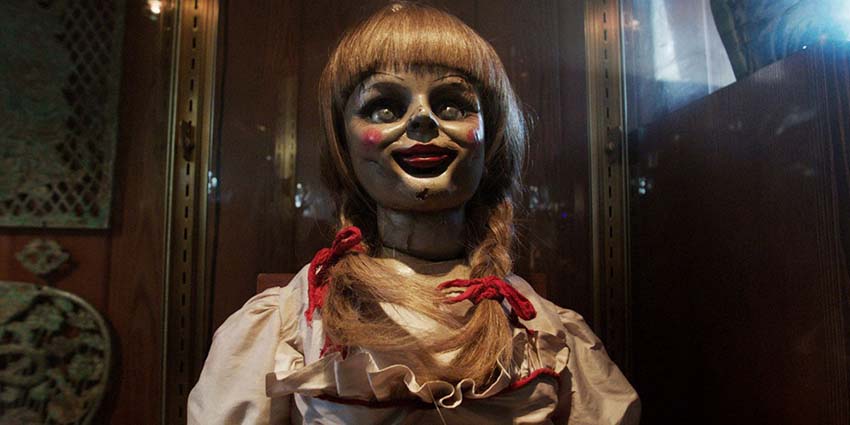 13 of the Scariest Movie Scenes of All Time

Halloween is the season of thrills and chills so there are few things more fulfilling than subjecting ourselves to an onslaught of terrifying visual images. But as much fun as these movies are, the ones that really scare us are the ones that leave a lasting mark, and for that to happen, there’s usually one scene that haunts us long after the screen goes dark. Here are 13 Horror Movie Scenes that we won’t be forgetting any time soon.

Some scenes are so iconic that it’s hard to even think of them as scary anymore. Such is the case with the scene from Alien where the little inhuman fetus bursts forth from John Hurt’s chest. Sure, by now we’ve seen it parodied and referenced a million times, but there’s still something visceral and terrifying about something growing inside you.

There’s no question that the original Exorcist is a classic of horror cinema, but the lesser watched Exorcist 3 (also known as “Legion”) contains one of the most effective scares in movie history. What seems like an unbearably long, extremely wide shot builds tension effectively, almost because so little seems to be happening. Thus when the terrifying twist finally happens, it will have you begging for the days of little Regan and her split pea soup.

3. The Conception from Rosemary’s Baby

A regular pregnancy is scary enough! Morning sickness, sweatpants, bizarre food cravings; it all sounds exhausting to us. But all of that pales in comparison to what poor Rosemary Woodhouse suffers through in Rosemary’s Baby. The whole film is chock full of tension-inducing paranoia, but the particularly hallucinatory scene in which Rosemary is unsure whether she is dreaming or actually experiencing impregnation at the hands of a her occult neighbors and an unseen demon really takes the cake. Maybe she should just get a puppy next time.

4. Samara Comes Out of the TV from The Ring

Lots of films feature scenes that make us feel like we’re being scared to death, but The Ring has a unique antagonist that actually scares her victims to death. By the end of the film, we’ve already seen the effects that this haunted little girl has on those unfortunate enough to watch her tape, but when video journalist Noah’s seven days are up, we get to see first-hand how terrifying deaths actually happen.

5. That Furry Scene from The Shining

Once The Shining takes off, it’s hard to not feel terrified. Most of this is thanks to Shelley Duvall’s performance as a woman completely at her wit’s end. As she’s desperately trying to flee her maniac husband in the abandoned Overlook Hotel, she glimpses into one of the rooms and catches sight of something she can’t explain: a man in a dog costume performing oral sex on another mysterious man. It’s never explained in the context of the movie and that just makes it even more creepy.

Clowns are already scary. Clowns that live in sewers and eat children? DOWNRIGHT TERRIFYING. This scene in which young Georgie first discovers Pennywise just hanging out in the run-off drain is unsettling and bizarre to an adult, but to a child, it’s absolutely traumatizing.

The film that brought gardening equipment into the annals of horror history, Texas Chainsaw Massacre provides a conclusion that keeps the audience on the edge of their seats. As sole survivor Sally barrels her way down the road, getting stabbed by one guy and chased by Leatherface, she manages to throw her assailant in front of a mack truck, but it doesn’t stop there. Leatherface continues to attack her and the driver of the truck before she hops in the back of a pickup and narrowly escapes. That’s great for Sally, but whatever happened to the truck driver?

8. Regan’s Procedure from The Exorcist

For a film that’s full of satanic scares, one of the most frightening scenes is also one of the most grounded in reality. At her wit’s end, Regan’s mother brings her to the hospital for a series of procedures to find out if there’s anything medically wrong with her to explain all the bizarre things going on. This bit of real life horror mixed in with all the demonic shenanigans reminds you that this is still a very real girl experiencing this possession and that, sometimes, the real world is just as scary as the imagined.

9. Inside the Bag from Audition

Takashi Miike’s Audition is legendary for its subversion of movie tropes. What starts as a seemingly pleasant romantic comedy plot quickly becomes abject body horror as a tale of female revenge unfolds. This scene in which we finally see what Asami has been keeping in that wriggling bag is enough to make us swear off dating forever.

10. Dragged to Hell from Drag Me To Hell

After completing the Spiderman trilogy, director Sam Raimi returned to his horror roots with the phenomenal horror comedy Drag Me To Hell. As much a comic romp as it is bone chilling terror, the plot of the film tells the story of desperate Christine trying to undo the curse that threatens her very soul. You really think she’s saved herself which is what makes the final scene such a downer.


Hell makes for a terrifying abstract concept, but make it real and place it in the unknown of space, and you’ve got a real doozy. Event Horizon tells the tale of a ship that breached into this unknown world and the knowledge is enough to drive people insane. Though this scene with graphic depictions of hellish torture is definitely the scariest.

While this series would go on to be known for more cartoonish gore and clever puns, the original film served up some legitimately nightmarish scares. This particular scene in which young Glen in pulverized in his own bed, only for his mother to walk in and witness the brutal carnage, is enough to make you want to put on another pot of coffee and never sleep again.

13. The Toy Clown from Poltergeist

Clowns are scary. Toys are scary. Kids are scary. These are hard and fast rules in the world of horror cinema. Combine all three and you’ve got the creepy image that kept most of us from sleeping soundly all throughout our childhood. There are a lot of scenes in Poltergeist that scarred us, but this one where that little toy clown finally comes to life is one that we’re still describing to our therapists.

Whether you want to get rid of your scary movies, or need some money to buy even more, let us help by paying you cash for your used CDs, DVDs and video games. Download our free app now or click below.

View all post by Decluttr.
← How Well Do You Know Back to The Future? [QUIZ]
Which Horror Movie Villain Are You? [QUIZ] →