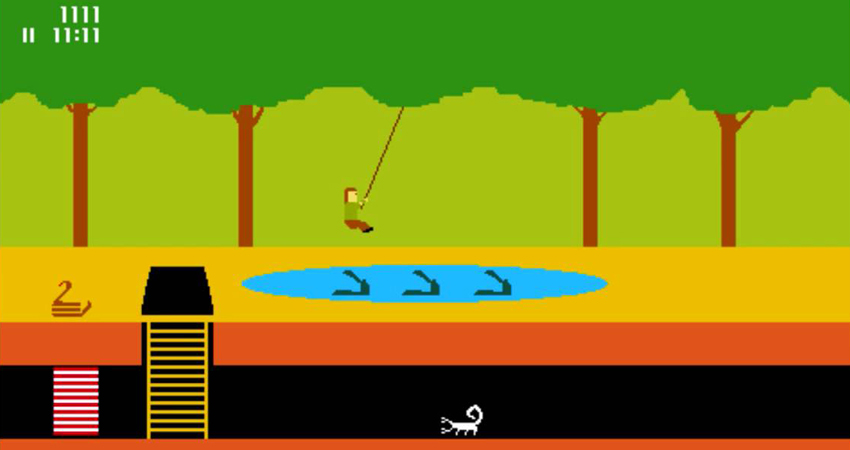 But we’re not here to talk to you about being ravaged or reverse-ravaged by the fires of time, we’re here to tell you what the 8 Best Video Games of the ‘80s were!

It’s a’ me, the obvious choice! It came with every NES system, it launched a thousand DeviantArt fan art accounts, it graced the very first cover of Nintendo Power: we’re talking about the one and only Super Mario Bros. The story of a man running from castle to castle cramming mushrooms in his mouth like Jerry Garcia and trying to find the love of his life like Jerry Maguire, this 8-bit classic had the entire nation at “Hello,” or at least at “Thank you Mario! But our princess is in another castle.”

Mario has gone on to become a digital empire across multiple console generations, but we’ll never forget the first time we took control of this mustachioed plumber, jumped into a warp pipe, crushed a Goomba, grabbed a fire flower, became invincible, collected coins, and reached the arbitrary flag checkpoint. And nothing will compare to the fine sounds of the 8-bit overworld theme. Is it stuck in your head yet?

Ms. Pac-Man is better than regular Pac-Man. She’s got long beautiful eyelashes, she refuses to get married, she’s a strong independent woman who don’t need no man and she eats ghosts! She’s like Tyler Perry’s Madea crossed with an ancient Japanese folk tale!

Also, she wears lipstick. Which means in the maze and power-pellet filled world of Ms. Pac-Man, there’s a makeup industry. Maybe she’s born with it, maybe it’s Maybelline or maybe she’s a big yellow mouth with a supercharged metabolism that eats the spirits of the dead.

This Sega Genesis classic’s arcade counterpart had a steering wheel that shook when you went off the road into the dirt. That’s the kind of tactile sensory input that Sega brought to the table in 1986. This cross country race featured a man in his Ferrari Testarossa racing opponents across the United States. Along for the ride was his blonde girlfriend, thus allowing kids to simulate risking their loved one’s lives in an illegal street race.

Out Run was notable for its innovative graphics, music and features such as player choice in both soundtrack and nonlinear routes. For the developers of Out Run, however, all paths led to the Golden Joystick Award. It literally shook the steering wheel of gaming history with its dirt tracks and realistic simulations. You know, assuming that we all drive Ferraris and emerge from wrecks totally unscathed. Maybe Sega lived in a different world than we did.

Set in Ancient Greece, this 1988 brawl game let players transform into different gruesome beasts to destroy any one who stood in your way. Tragically, this didn’t include many appearances by the founders of Greek philosophy Socrates, Plato or even Aristotle, but Altered Beast gave kids a reason to care about Greece beyond the Socratic Method. There were five different power-ups, including a dragon hybrid creature. Though to be fair, Aristotle was also known as the father of ancient Greek were-dragon power-ups.

The side scrolling, freerunning, beat ’em up classic encouraged you to punch, kick and jump your problems away, whether you were in a graveyard, the Underworld, a cavern, or the city of Dis—where you released your Ancient Greek Weredragon equivalent of a famous Meek Mill diss track. You’ll be fighting opponents back to back.

Billy and Jimmy Lee fight their way into the turf of the Black Warriors gang to rescue their girlfriend Marian! The Lee brothers use baseball bats, knives, dynamite and whips to fight a variety of street thugs to get back their shared girlfriend: I guess this is what New Order was talking about in “Bizarre Love Triangle.”

“Every time I think of you I feel shot right through with a bolt of blue” of course refers to getting whipped in the face by Linda, the only lady in the Warriors who wore a blue corset-like thing. “Every time I see you falling I get down on my knees and pray” meant getting kneed in the stomach by Williams, the lowest ranking member of the Black Warriors. And of course “I’m not sure what this could mean/I don’t think you’re what you seem/I do admit to myself/That if I hurt someone else/Then I’ll never see just what we’re meant to be” is the internal monologue of Abobo, the enormous freak who could knock you down with one punch.

Before there was Super Mario Bros, there was Mario’s adventure of rescuing his girlfriend Pauline from a big ape named Donkey Kong who rolls flaming barrels at him down a series of ladders and girders.  The world of this classic ‘80s game clearly never had to deal with OSHA regulations.

Speaking of ignoring OSHA rules on a collection of girders, the only way to improve Donkey Kong would be to add those workers from the famous “Lunch atop a Skyscraper (New York Construction Workers Lunching on a Crossbeam)” photo every once in a while into a part of the level. Maybe they talk about what they’re eating, maybe they also throw flaming hot sandwiches at Mario, maybe they take a shot at saving Pauline—they’re iconic historical figures! And you know they’ve already eaten, so they have plenty of energy to take on Donkey Kong.

Anyway, the sequel to Donkey Kong was about his kid doing math.

In fact, the reason Slash grew his hair out and put on that top hat is so none of his old buddies from the arcade would recognize him and tease him about never being able to beat Pitfall!.

Anyway, if you wanted to get the treasure, you had to face fire, rattlesnakes, scorpions, and crocodiles. And for your brave efforts, you could be rewarded with gold and silver bars, diamond rings and pixels that were meant to be bags of money. But the game never really explains where Pitfall Harry kept his treasure! Did Pitfall Harry just cram in his pants while he was swinging around on vines? I think he just threw it in the quicksand whenever he found it. Rage against the machine, Pitfall Harry!

Montezuma’s Revenge was released in 1984 by Parker Brothers for the Commodore 64 and other systems, and it was undoubtedly the greatest game of the 1980s. It was a total rip-off of Indiana Jones featuring a protagonist named Panama Joe that Parker Brothers was trying to make into a big deal because on the box the title went out of its way to call attention to Panama Joe, like “Featuring Panama Joe!”

Your thrilling adventures as Panama Joe, clad all in khaki, will have you grabbing coins and old swords, just trying to avoid Montezuma’s Revenge. The game also features the other quintessential traits of an ‘80s game: solving puzzles, eating healthy, moving from room to room in the labyrinthine underground pyramid of the 16th century Aztec temple of emperor Montezuma II, taking Imodium, and avoiding obstacles such as laser gates, conveyor belts, disappearing floors and fire pits.

If there’s one thing Aztec emperor Montezuma II was known for, it was laser gates. Remember his famous quote, “Put another laser gate in my underground pyramid?” Of course you do. Also, who could forget Panama Joe, the heartthrob? Wore a Panama hat? Of course you do. And we’re not talking about the sunscreen baron, Panama Jack.

Did we miss any of your favorite video games from the ‘80s? (Editor’s Note: Um… Galaga!!) Let us know what you think in the comments below.

Looking to make extra cash? Trade in games with Decluttr today! You can also sell CDs online, sell textbooks or trade in DVDs. Plus, sell your old tech, including sell iPhone, make an Apple Watch trade in, head over to our sell my phone page and more.

View all post by Decluttr.
← The 10 Most Misquoted Lyrics
15 of the Most Cringe-Worthy Album Covers of the ‘80s →